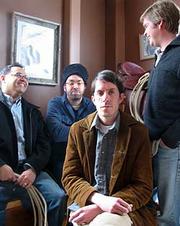 Unless you're a fan of early '70s country-rock, the names Gene Clark, John Stewart and Ronnie Lane may sound unfamiliar.

But how about the Byrds, the Kingston Trio and the Faces?

With rare exceptions (such as Neil Young or Gram Parsons), singer-songwriters pursuing solo careers in the wake of a great band's demise have about as much chance of making it as a Saturday Night Live expatriate on the big screen.

But when Lawrence's Vitreous Humor disbanded in 1996, lead singer Danny Pound didn't let history dictate his career path. Instead, he reformed: First, as The Regrets; Second, as a four-track tinkering noise unit with friend Billy Lamboley; Finally, as The Danny Pound Band.

"I think I've finally come to an understanding of what I really like about music and what I don't like," Pound said. "I'm a words guy."

Not that he ever wasn't. With song titles like "She Eats Her Esses" (Vitreous Humor) and "Lance the Proverbial Boil" (The Regrets), no one could ever fault Pound for shortchanging the English language.

The difference is that instead of verbally vomiting lyrics onto a plate of sludgy guitar spaghetti, Pound is now capable of delivering a twist-of-phrase with the delicate touch of a newborn baby.

"The lyrics in Vitreous Humor were more like word salad -- just thoughts and words and hope the ideas meet up somewhere," Pound said.

"Now I'm more interested in being more descriptive and clear, writing from outside my own experience instead of just describing how I feel."

In many ways, The Danny Pound Band is simply the latest incarnation of Vitreous Humor and The Regrets.

Drummer Dan Benson follows Pound back to 1988 when the two Topeka lads, along with bass player Brad Allen, formed Vitreous Humor at the ripe old age of 16 (bassist Brooks Rice would later join the band and Allen would switch to guitar).

Coming to see shows in Lawrence exposed the Beatles-loving youths to a new breed of angular rock bands like Zoom (with whom DP Band bassist Jeremy Sidener played) and Panel Donor. Both bands proved precursors to the propulsive Kansas City sound later defined by Giant's Chair, Season to Risk and Shiner.

A two-week east coast tour with Archers of Loaf and opening slots for Urge Overkill and Everclear followed, and soon Vitreous Humor was attracting major label interest from Elektra and Maverick.

"There was a split down the middle as far as who wanted to (be on a major label)," Pound said.

"Brooks and I thought it would be dumb, not having any fan base. We hadn't really toured and we were kind of cynical about the whole major label deal. We didn't think we'd have a chance in hell."

So does he still feel like he made the right decision?

"No," Pound emphatically said. "In retrospect I should have just taken the money and ran."

Though they never made it to a major label, Vitreous Humor did manage to release a small but influential body of work on Crank! Records -- two 7-inches, an EP and a posthumous collection.

And Pound even made enough money to buy a used car when Nada Surf purchased the rights to record a version of "Why Are You So Mean to Me."

External and internal tensions prompted the breakup of Vitreous Humor in 1996, but the three founding members quickly reformed as The Regrets -- a stripped-down, more rhythmic and clean variation. The Regrets issued one full-length album -- 1997's "New Directions: Results Beat Boasts" --and in an ironic twist of fate, reformed as Vitreous Humor to play a few concerts in support of an odds and ends collection released by Crank! titled "Posthumous".

"After that I just started doing home recording and going through different phases," Pound said. "I was done with The Regrets and off on some other trip.

In revamping his sound for the DP Band, Pound found inspiration in the greats -- Bob Dylan, Neil Young and Randy Newman -- as well as some lesser-known artists, such as campy outlaw-country singer Kinky Friedman and folk sister-trio the Roches.

"I think one of the greatest times in music was in the early '70s when all of the musicians started to do their own thing and put out solo records," Pound said.

"The record companies gave them money and just said go for it. A lot of that stuff just got swept under the rug."

Live, the DP Band performs a mix of originals and covers. The cover tunes are often so slyly reworked that they can be difficult to tell apart from Pound's songs.

Many of the more obscure tunes were discovered by the nimble crate-digging fingers of piano and guitar player David Swenson, who joined the DP band for their first show, opening for Bonnie Prince Billy at the Bottleneck.

"I do a lot of cross-referencing (when hunting for music)," Swenson said. "I don't think you should put a disclaimer in when you're performing someone else's song. You make it your own when you learn it."

The band takes a similar approach to Pound's tunes, often reworking them into a completely new meter or chord structure. More than a decade of playing together has afforded Pound and Benson a razor-sharp telegraphy that flourishes in the context of a country-rock band.

"I can tell by the way Danny pulls away from the microphone if he's ready to stop the song or not," Benson said. "With Vitreous Humor you had to be completely focused because if you dropped the beat the whole thing fell apart. With The Danny Pound Band you can feel your way through the song and not have to worry about where it's going -- everybody knows."

Perhaps the reason the DP band puts so much work into its live sets is that the band has never released anything as a unit. Though the band members would like to record their songs live in a proper studio setting, monetary constraints have dictated they work on a lower budget.

The resulting lo-fi demos have circulated among friends but have been withheld from formal release. In the meantime, the band is seeking a label situation that would fit with their lifestyle.

"We have jobs now," Sidener said. "Dan (Benson) has a child. We don't have the freedom to promote ourselves that younger bands do, to take off for two to three months at a time."

In lieu of touring, the band members invest their energy into making their local shows special. The band recently performed a set at Shalor's in the Eldridge Hotel with a grand piano.

"We like to give people an experience they haven't had before in this town," Sidener said.

Swenson added: "The last thing we want to be is a bar band totin' our shit around this town for the next 10 years playing every couple weeks at some spot on Thursday night."