Replay Lounge has reasons to celebrate 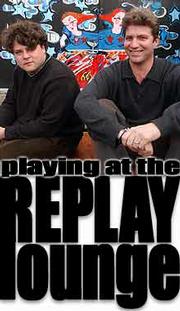 When the Replay Lounge opened 10 years ago, it wasn't the indie rock icon it's since become.

At first, the building at the corner of 10th and Mass. was opened as a pinball joint where you could get a beer, 75-cent burgers and milkshakes. The music would come the next year, and when it did it
overshadowed everything else (except maybe the beer).

The Eudoras - Lawrence's surf rock stars then and now - played the virgin venue's first show in 1994. The band set up on the floor, on the same few feet of space where the crowd would pack in, between the bar and the windows that look out on Mass.

While finishing a chemistry degree at KU, Sullivan has worked the door, tended the bar and cleaned up for countless shows. This Saturday he has his own show - Sulli's Birthday Extravaganza, a four-year tradition featuring The Bubble Boys.

"A lot of bars could be in any town or they're just carbon copies of each other," Sullivan said. "There's something about the Replay that you're not going to find any place else in the country. Not being able to put your finger on it is one of the strengths of this place. Because if you could put your finger on it, (bars like the Replay) would probably be everywhere."

Neither can Bubble Boys' drummer Chris "Cookie" Bulgren explain exactly what the bar's appeal is, but the Replay is virtually the only place his band has performed for the last four or five years. In
fact, with just a couple exceptions, the lone opportunity to catch The Bubble Boys has been at Sulli's Birthday Extravaganza.

"I joke around that we never broke up, we just didn't play any shows," said Bulgren, whose Lawrence pop punk band - with bassist Dan Cook and guitarist Brian Gee - hasn't played regularly since '98.

"The Replay's allowed us to come in and do our thing and take home the money. And I don't think it's just that we're friends with them, I think they've got some of that punk ideology."

Beginning to play
Indeed, Replay co-owner Nick Carroll seems to be motivated as much by music as by making ends meet. 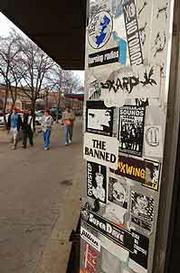 Virtual Reality photo
Click here to look around inside the Replay

"Part of our secret is to keep it simple, so the bands can make as much money as possible," Carroll said. "We're not going to charge a huge cover, but they're going to make a lot of money because they're going to get all of the door. We're not taking out a huge sound fee or any of the door for ourselves. We give it all to the bands and I think that makes a big difference.

That's not the only thing that has groups beating down the Replay's door for gigs. A lot of the lure is the venue's attention to local musicians, said Rob Gillaspie of the Lawrence band Esau.

"Most venues don't seem to care about the local bands so much as they do the bigger touring bands," Gillaspie said. "The local bands are just there to waste time until the crowd shows up. At the Replay it's really intimate and real people run the place ... I think it helps that most of the (employees) are in bands themselves."

Including the owner Carroll. Throughout the early '90s, Carroll was the front man for Nic Cosmos, one of Lawrence's most popular acts of the era.

About the time his band had run its course, Carroll's bar was born.

In 1993, the former S&L building with its early '70s style facade had just closed its doors as the local Democratic party headquarters.

Carroll and a few investors from his hometown of Salina jumped on the opportunity.

"When I opened it up and said it was going to be an arcade with a restaurant, it didn't sound like a good idea to a lot people," Carroll said. "I knew just from hanging out in bowling alleys that
it's a perfect mix of being able to drink beer, eat a burger and play pinball. To me it was a no-brainer."

The Replay's tripped out interior was built from scratch, and the two blacktop parking spaces in the alley were converted into the open-air beer garden.

While the place was opening its doors, a club down the street was nearing its end. The Hideaway - which featured music in the vein of what the Replay now hosts - soon closed and left a small-venue void in town.

"All of a sudden bands were wanting to play here, so we'd move the video games over and it was a real hit," Carroll remembered. "It started out with just friends and then it started happening that
national shows would need a venue."

As the music became Replay's strong suit, Carroll removed the kitchen and shortened the bar to maximize space. Aside from its music, the beer garden is perhaps the Replay's strongest asset, bringing in half the bar's revenue.

"If you come to the Replay and you don't like the band or it's not your scene inside, you can go outside and there's a whole other bar and atmosphere," Carroll said. "And with a dollar or $2 cover you can take the gamble."

Added Sullivan: "That's one of the strengths of the Replay is that everyone's welcome. It's sort of a melting pot. Having the two rooms definitely helps with that. There isn't a group of people that
doesn't come into the Replay."

Gimme shelter
Earlier this summer, the beer garden seemed in jeopardy, following the construction of an apartment building across the alley. A clause in the Replay's site plan says that the bar must close its patio if the city receives "legitimate complaints" of noise or trash from neighbors.

"We had a lot of concern going in, but they picked the right guy to build that building," Carroll said of Martin Moore, who also has a background in music with the Billy Spears Band. "He built a great
building that really blocks out sound so there's been no problems.

"We built this drum riser and moved the bands (to the furthest corner from the back door). And outside we put up the windbreaker. They're sound flappers," Sullivan described.

"It's really become like a new bar for Lawrence because no one's been able to be outside during the dead winter months.

"It's taken years to get here," Carroll added. "It's like an aged-wine."