New York — Eminem and Bruce Springsteen were favorites to dominate today's Grammy nominations, but a chanteuse, a teen rocker and an R&B songbird could also be up for multiple honors.

Eminem, a five-time Grammy winner, had the year's top-selling album with "The Eminem Show" and also had a huge movie debut with "8 Mile," the soundtrack of which was among the year's 10 best-selling discs.

But Springsteen, a seven-time Grammy recipient, may have had the year's most revered disc, the 9-11 inspired "The Rising," which also was his best-selling record in years.

If Eminem were nominated for album of the year, few expect the kind of firestorm that accompanied his nomination in 2000. "The Eminem Show" was less polarizing than "The Marshall Mathers LP," and 2002 seemed to be the year that mainstream America embraced the Detroit rapper. 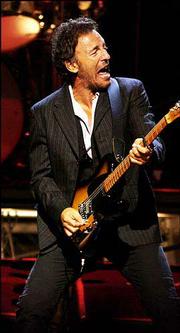 Bruce Springsteen and Eminem both had phenomenal years in 2002, and they are expected to lead the pack of nominees for Grammy Awards. The nominations will be announced this morning.

"I think Eminem is going to get his due this year," said John Norris of MTV News. "I think that a lot of people felt like he should have won a couple of years ago with 'The Marshall Mathers LP."'

That award went to Steely Dan.

Springsteen was nominated for album of the year in 1985 for "Born in the U.S.A.," but he lost out to Lionel Richie's "Can't Slow Down."

Unlike some previous years in which one artist clearly dominated the field, there are several top contenders this year -- many of them new acts.

There is the quadruple-platinum debut from Avril Lavigne, a Canadian teenage rocker who helped turn youth interest away from teen pop; the triple-platinum debut of R&B singer Ashanti; and the year's surprise sensation, Norah Jones, whose jazz-inspired "Come Away With Me" sold more than 2.7 million discs.

Although rapper Nelly had the second best-selling disc of the year with "Nellyville" and two huge hits with "Hot in Herre" and "Dilemma," he was a longshot to be nominated for album of the year. But Wilson and Norris both said those hits could be rewarded with a record-of-the-year nod and nominations in rap categories.

Other possible contenders for record of the year included Pink's "Get the Party Started"; Lavigne's "Complicated"; Santana's "The Game of Love" with Michelle Branch; Jones' "Don't Know Why"; Eminem's "Lose Yourself" or "Without Me"; Nickelback's "You Remind Me"; and Vanessa Carlton's "A Thousand Miles."