Exhibition showcases artist whose promise was cut short by illness

Norfolk, Va. — Susan Watkins studied at a top art school in New York City, painted in Paris and built an international reputation as a skilled portrait and landscape artist.

Although she was a talented pioneer at a time when it was difficult for women to forge careers as professional artists, she didn't get the chance to build the lasting fame of a Mary Cassatt.

Her health failing, she finally consented to marry her longtime suitor, a banker named Goldsborough Serpell, in January 1912 and move with him to Virginia. She died at age 37 in June 1913.

When Serpell died in 1946, he left 62 of Watkins' works -- plus photographs, scrapbooks and other memorabilia documenting her career -- to what is now the Chrysler Museum of Art.

About two dozen of those paintings and sketchbook pages have been pulled out of storage for an exhibition tracing her career. "Gentle Modernist: The Art of Susan Watkins" runs through the spring.

"It seemed time to bring it out again," chief curator Jeff Harrison said of the collection, which last was displayed in the mid-1980s. "They're works of remarkable merit that are part of an excellent story. ... It's really quite romantic."

A range of styles

Born to a wealthy family in San Francisco, Watkins began training at 15 at the Art Students League in New York. Her father, James T. Watkins, moved the family to the city so he could work as an editorialist for the New York Sun.

After her father died, Watkins moved to Paris in 1896 with her mother, Susan Ella Owens Watkins, who encouraged her to become a professional painter.

Watkins chose to continue her studies with painter Raphael Collin, who instructed her in the French academic style. Yet, her brushwork and use of bright color in her studies of Parisian parks show the influence of the Impressionists.

"She mastered a range of techniques and styles," Harrison said. "She was quite able to paint in the impressionist style, and she also painted in the more academic and formal style." 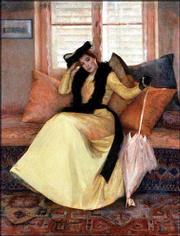 This oil painting by American artist Susan Watkins (1875-1913), titled "Lady in Yellow," is a circa 1906 portrait of her sister, Eleanor Reeves. The painting, which portrays upper-class life in America, is among the Watkins' works on display at the Chrysler Museum in Norfolk, Va., through spring of 2003.

She exhibited regularly at the Paris Salon, an annual exhibition of contemporary art, and at major venues in the United States, including the Corcoran Gallery in Washington, D.C.

"The 1830 Girl," done in 1900, won Watkins a third-class gold medal at the Salon. The painting of a woman wearing an ivory, shoulder-baring evening gown reflects Watkins' interest in historical portraiture.

The glowing "Lady in Yellow," a circa 1906 portrait of the artist's sister, Eleanor Reeves, is a genre scene of upper-class life. Reeves reclines on a sofa, looking as though she had either just arrived or is about to get up.

"A Young Girl," painted in 1910, was Watkins' last portrait and is strikingly modern, with its asymmetrical composition. Instead of being in the center of the painting, the girl, her thumb defiantly hooked on her belt, is to the left, perched on the arm of an overstuffed, floral-print arm chair.

"It gives you a sense of what she might have done had she lived," Harrison said.

'A most estimable lady'

In 1910, Watkins returned to New York. She was made an associate member of the National Academy of Design, which signaled that she was considered an American artist on the rise, Harrison said.

Then she fell sick. The exact nature of her malady is unclear, because such things weren't discussed publicly back then, but it probably was cancer, Harrison said.

The financially independent Watkins had for years rejected marriage, focusing on her career.

"Money, social honors, a brilliant marriage are all very well ... but to work out things with one's hands and brains gives the most lasting and most perfect happiness," Watkins said in an interview in The New York Times in 1910.

Serpell had followed her to Europe and courted her for years. She finally agreed to marry him in January 1912. The exhibition includes a little portrait that Watkins painted of her husband standing in a leafy glade on the island of Capri in 1906.

Serpell never remarried after Watkins died. "She was the love of his life," Harrison said.

An article in the Ledger Dispatch of Norfolk noted Watkins' passing, describing her as the wife of Serpell, then vice president of the Seaboard National Bank, and "a most estimable lady, with many very attractive qualities."

It also mentioned, but not until the third paragraph, that Watkins was "a prominent artist of New York and Paris ... having numbered among her works some very exceptional canvases."