June 21 the magical date when Harry Potter will appear

Within hours of Wednesday's announcement that "Harry Potter and the Order of the Phoenix" would be in bookstores on June 21, the book hit No. 1 on Amazon.com's best-seller list.

That's just about all that was revealed in a joint statement Wednesday from Britain's Bloomsbury Publishers and Scholastic Children's Books in the United States. Details of Harry's latest adventure remain as secret as the whereabouts of Diagon Alley, where Harry buys his wizard supplies.

But young fans were delighted.

"I am so excited -- it has been much too long since the last one," said 10-year-old Phillip Weekes, who heard the news as he came out of his primary school near Bishop's Stortford, 30 miles north of London. "I'll buy it as soon as it comes out."

"It's about time there was another one," said 10-year-old Oscar Nisbet, who has read the first four Potter adventures.

The plot remains a mystery, but the publisher did reveal how the book begins: "The hottest day of the summer so far was drawing to a close and a drowsy silence lay over the large, square houses of Privet Drive. ...The only person left outside was a teenage boy who was lying flat on his back in a flowerbed outside No. 4." 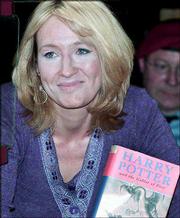 Author J. K. Rowling holds up her book "Harry Potter and the Goblet of Fire," the fourth in the popular Harry Potter children's series, in this July 8, 2002, file photo. Rowling has completed her fifth book about young wizard Harry Potter, and it will be published in Britain and the United States on June 21.

And youngsters will have a few months to ponder what Hogwarts headmaster Albus Dumbledore means when he tells Harry, some pages on, "It is time ... for me to tell you what I should have told you five years ago, Harry. Please sit down. I am going to tell you everything."'

Rowling's books have served as rebuttals to those who predict the death of reading. Children anticipate a new Potter book the way teenagers once hurried out to buy Beatles records.

Fans have pestered book sellers and obsessed on Web sites about the next installment. Hunger for news about Potter No. 5 drove an American collector to pay more than $45,000 last month for a card full of clues about the plot. It contained 93 words, including "Ron," "broom" and "sacked."

The industry endured its slowest holiday season in years, with many complaining about the lack of a "must-have" book to get shoppers in stores. Few books are more "must-have" than a Harry Potter story.

"It's an emotional lift, something to drive business and put books back in the news," said Carl Lennertz, publisher and program director of BookSense, a national marketing campaign for independent bookstores in the United States.

Some fans may have to squint through the "Order of Phoenix." One reason for all those pages is that publishers have used a smaller type. "The last book was pretty chunky, and we wanted to prevent this one from being too big," said Bloomsbury spokeswoman Rosamund de la Hey.

Rowling's four published titles have sold an estimated 192 million copies worldwide in hard and soft cover, and the books have been published in at least 55 languages and distributed in more than 200 countries.

The first two books have been adapted into hit movies.