Los Angeles — When it comes to predicting Oscar winners, the closest thing Hollywood has to a crystal ball is the Golden Globes.

The future is full of question marks for the Globes itself, however, as the Academy Awards move from March to February next year.

The change could lessen the value of the Globes as a consensus-building tool because the Oscar nominations deadline -- now 10 days after the Globes -- may shift ahead of it to early January.

For now, the Hollywood Foreign Press Assn., which has hosted the Globes for 60 years, is in a holding pattern as its organizers wait to see what Oscar planners decide to do.

Dagmar Dunlevy, president of the association, said Tuesday it's too early to speculate about moving the event. She said she expected to discuss the matter with NBC, which broadcasts the ceremony.

"Right now, it's going to be the third week in January as always," she said. "It could be NBC decides we're going to have a look at this and revisit the whole situation. It's always about doing things better and keeping things fresh."

She said any scheduling change would likely be decided in March and dismissed concerns about the Globes losing its influence.

"Do I have control about studio marketing and possibly having power taken away? No," Dunlevy said. "But it's not about power ... It's about appreciation" for artists.

As part of a two-year experiment, the Academy of Motion Picture Arts and Sciences decided to move the 2004 Oscars from late March to Feb. 29 in a bid to shorten the three-month downtime that has become clogged with other movie award shows and intense campaigning by studios. 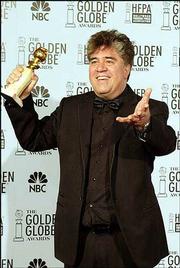 Director Pedro Almodovar shows off his Golden Globe Award for Best Foreign Language Film for "Talk to Her." The Golden Globes, traditionally broadcast the third week in January, may consider changing to an earlier date in order to keep ahead of Academy Award nominations.

"But we will be obliged to have them earlier," Unger said.

Fearing interest in Hollywood backslapping will fade after the Oscars, many of the organizations that host competing shows have already adjusted their own 2004 dates to early February, including the Screen Actors Guild, the Directors Guild of America and the British Academy of Film and Television Arts.

The Golden Globes are selected by the nearly 90 members of the Hollywood Foreign Press Assn., and their opinions have received increasing attention mainly because of timing and television.

The live NBC broadcast has traditionally exposed winners to a national audience after the Oscar nomination ballots are mailed to Academy voters, but before the return deadline.

"Those winners loom large in the minds of Oscar voters as they cast their ballots," said Tom O'Neil, author of the book "Movie Awards" and proprietor of the movie punditry site GoldDerby.com. "I suspect we saw the Oscars played out on the Globes stage."