Newport Beach, Calif. — Pulitzer Prize-winning cartoonist Bill Mauldin, who as a young Army rifleman during World War II gave newspaper readers back home a sardonic, foxhole-level view of the front with his drawings of weary, dogface GIs Willie and Joe, died Wednesday at 81.

Mauldin died at a nursing home of complications from Alzheimer's disease, including pneumonia, said Andy Mauldin, one his seven sons.

"It's really good that he's not suffering anymore," he said. "He had a terrible struggle."

Mauldin was one of the pre-eminent editorial cartoonists of the 20th century, writing and drawing 16 books.

It was at the Chicago Sun-Times that Mauldin drew one of his most famous cartoons, published after President Kennedy's assassination in November 1963. It showed a grieving Abraham Lincoln, his hands covering his face, at the Lincoln Memorial.

With Willie and Joe, Mauldin became the voice of the World War II infantryman. From 1940 to 1945, the laconic pair of unshaven, slump-shouldered soldiers slogged their way through battle-scarred Europe, surviving the enemy and the elements while sarcastically mocking everything from their orders to their equipment and even their allies.

In one drawing, soldiers are marching, bone-weary. Says Willie: "Maybe Joe needs a rest. He's talking in his sleep."

In another, the two are about to jump a down-in-the-mouth German soldier walking by with a bottle of liquor. Willie says: "Don't startle 'in, Joe. It's almost full." And in another, Willie tells a medic: "Just gimme a coupla aspirin. I already got a Purple Heart."

The cartoons, published in Stars and Stripes and other military journals, delighted his fellow soldiers and endeared Mauldin to Americans at home.

Cartoonist Bill Mauldin receives the Harry S. Truman Good Neighbor Award in this May 8, 1996, file photo in Kansas City, Mo. Mauldin, one of the 20th century's pre-eminent editorial cartoonists, died Wednesday at age 81. Below is a cartoon featuring the GIs Willie and Joe.

Mauldin called himself "as independent as a hog on ice," and his nonconformist approach brought him a face-to-face upbraiding from Gen. George Patton. Mauldin continued to draw what he wanted.

In 1945, at age 23, his series "Up Front With Mauldin," featuring Willie and Joe, won him the first of his two Pulitzers for editorial cartooning.

The second prize came in 1959, while he was at the St. Louis Post-Dispatch, for depicting Soviet novelist Boris Pasternak saying to another gulag prisoner: "I won the Nobel Prize for literature. What was your crime?"

In recent years, as Mauldin battled Alzheimer's, thousands of veterans, widows and other well-wishers sent him letters, offering thanks and stories of survival.

"You have managed to capture the irony, double standards and outright insanity of Army life," one man wrote, "in a way that allows us to laugh at ourselves and our leaders and keep moving forward in the face of adversity." 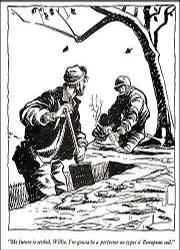 The campaign to recognize him was sparked by veteran Jay Gruenfeld, who spent years wondering what happened to the man who had made him laugh in a foxhole under fire. He sought out Mauldin and then wrote to veterans organizations and contacted newspaper columnists urging people to remember him. Soon Mauldin was receiving hundreds of letters a day.

Said Andy Mauldin: "They tried to pay him back for support he had given them."

Mauldin is survived by former wives Jean Mauldin and Christine Lund and all of his sons. Funeral arrangements were incomplete, but burial is planned in Arlington National Cemetery.