Sundance jurors gave the documentary grand prize to "Capturing the Friedmans," which traces the disintegration of a family after the father and youngest son are arrested for child molestation.

The audience award for dramatic films, chosen in voting by Sundance film-goers, went to "The Station Agent," a drolly comic portrait of friendship among a misanthropic dwarf (Peter Dinklage), a grieving woman (Patricia Clarkson) and a motor-mouthed coffee peddler (Bobby Cannavale).

"The Station Agent" earned the Waldo Salt screenwriting prize for Tom McCarthy, who also directed. Clarkson received a special-jury prize for outstanding performance for "The Station Agent" and two other Sundance films in which she co-starred, "Pieces of April" and "All the Real Girls."

The cross-dressing Charles Busch also won a special-jury prize for outstanding performance for "Die Mommie Die!", in which he plays an ex-diva who plots to kill her husband with a poisoned suppository. Busch also wrote the screenplay. 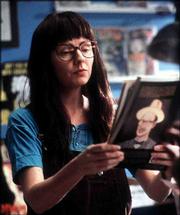 Hope Davis appears in a scene in the 2002 film "American Splendor," which won the grand jury prize at the Sundance Film Festival. 'Splendor,' a documentary about comic-book-writer Harvey Pekar, won the independent film award Saturday in Park City, Utah.

"My Flesh and Blood," a documentary that follows a year in the life of a woman who adopted 11 special-needs children including legless girls and terminally ill boys, won the documentary audience award. It also earned the documentary directing prize for Jonathan Karsh.

The dramatic directing award went to Catherine Hardwicke for "thirteen," a tale of a bright teen (Evan Rachel Wood) whose loving relationship with her mother (Holly Hunter) crumbles from the bad influence of a new school chum.

Among other Sundance winners:

l "Whale Rider," a New Zealand film about a girl who aspires to lead her Maori village, won the world-cinema audience award.

l Dana Kupper, Gordon Quinn and Peter Gilbert won the documentary cinematography honor for "Stevie," from "Hoop Dreams" director Steve James, about a troubled youth to whom he was a "big brother."

l "What I Want My Words to Do to You," about female prison inmates coming to grips with their deeds in a writing workshop, won the festival's freedom of expression award.

l Special jury prizes for emotional truth went to the dramatic features "All the Real Girls," a painfully authentic examination of young love.