An iridescent mother-of-pearl is
related to a rainbowed soapbubble
compared to polychromed pyrotechnics
contrasted to camouflaged war paint
verses salt and pepper colored confetti
opposed to technicolored tie-dye
against a beribboned aurora borealis.

But he also tried to get at the abstractions of colors.

"Everybody has a mental image of what iridescence is," says Lu Vaccaro, the late artist's wife. But finding the words to describe the phenomenon or the right color combinations to depict it on canvas is a different story.

Vaccaro spent a lifetime trying to tell those stories.

"It is the search for visual truth and essence that has inspired me," he once wrote.

Portions of his search, manifested in brilliant color on a grand scale, are on display at the Lawrence Arts Center through Feb. 14. The timing of the exhibition, which includes 22 of Vaccaro's largest paintings, nearly coincides with the anniversary of his death. He succumbed to complications from cancer Jan. 2, 2002. He was 70.

The show, "Multicolored: Paintings by Nick Vaccaro," named after the poem Vaccaro once penned, fills the Arts Center's large gallery; a few paintings even spill into the small gallery. They represent four of the many series he worked on from the early 1960s through the late '90s.

"He was very productive," said Lu, who pulled the paintings from storage and organized the anniversary exhibition of her husband's work. She will give a gallery talk at 7 p.m. Tuesday.

Lu Vaccaro, wife of the late painter and KU art professor Nick Vaccaro, stands in front of his paintings in the Lawrence Arts Center gallery. The work, along with photography by Missouri artist John Hess, will be on display through Feb. 14.

"I think he would have liked the show," she said. "It's happy. It's bright and cheery."

That characterization might be apt for the couple's marriage, too. Nick and Lu were an artist couple; Lu is a potter.

"It was a good life. I know a lot of artists can't seem to make it together because of their egos," Lu said. "We were always supportive to one another."


Vaccaro lived and worked more than half his life as an artist/teacher in Lawrence.

He was a prolific producer, creating paintings, drawings, prints, collages, sculptures, assemblages and boxed assemblages. His work has been included in more than 125 exhibitions locally, nationally and internationally. It has been purchased by museums in Tennessee, Michigan, Texas, Alabama and California.

Vaccaro joined the KU faculty in 1963 as associate professor and chairman of the drawing and painting department -- back when the art and design departments were based on the third floor of Strong Hall. He was promoted to full professor in 1970. 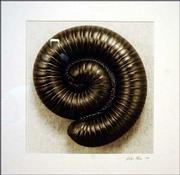 Millipede: circle the wagons, a photograph by John Hess.

He was also a dedicated artist who worked every day.

"When they (his paintings) got to the point that they surprised him, he said, 'I guess this one's done," Lu said.

One series in the exhibition consists of 6-foot by 7-foot canvases speckled with vibrating dots of color, each applied with a palette knife. Vaccaro described them as "what Monet might be doing today if he were still alive."

Another series, represented by two paintings on the galleries east wall, explore geometry, line and color. On the south wall are geometric color block paintings inspired by the Four Corners area in the American southwest. The earliest of his works hang on the galleries west end, their colors and lines more subtle than those in the later paintings.

The masters who inspired Vaccaro creep through in his work: Mondrian, Monet, Matisse, Vermeer.

For his part, Vaccaro seemed to have achieved a perfect balance between his life and his art. Two years before his death, he left this satisfied message to the world: "I think in life you need to find your life's work and your soulmate and then you've got it. And I certainly have it."