Talk often takes a back seat to taste in the fiery little restaurant that Topeka author Tom Averill gives life to in his latest book, "Secrets of the Tsil Cafe."

"The mouth can talk, but tasting is first. Talk is just the translation," Robert Hingler, the restaurant's proprietor tells his young son, Wes, early in the novel.

The book, which hundreds of Lawrence residents already have finished or are busy reading in preparation for February's Read Across Lawrence events, reverses those priorities. It opens with the Tsil Cafe's spicy menu and reveals recipes and details about the exclusively New World ingredients that Robert Hingler uses in his cuisine.

Those ingredients become metaphors for characters, salve for wounds inflicted by secrets and the landscape for Wes' coming of age. And words on pages become temptations for readers to experience the food.

At least that was Averill's intention. Describing the difference between the art of fine writing and the art of fine food preparation, he said of a chef friend: "He tries to create food that people want to talk about.

"I wanted to write in a way that made people want to taste the food or to imagine that they were tasting the food."

In discussion circles, classrooms, public forums and kitchens next month, both talking and tasting will be on the menu.

"It just breathes a lot of life into the book as I see people encountering it and asking questions about it and responding to it in ways that authors I think are very lucky if they get that," he said.

Averill knows a little about the unique dishes Robert Hingler serves in his cafe on 39th Street in a fictional version of Kansas City. He developed and kitchen-tested all 26 of the book's recipes. 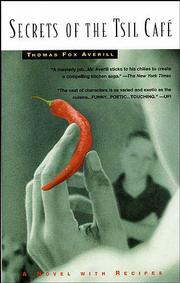 The concept of New World cooking may be foreign to meat-and-potato Kansans. The idea is to use only the ingredients that would have been available in North America before European settlement -- foods like corn, buffalo, chiles, beans, prickly pear cactus.

Averill got interested in New World cooking in 1992, the 500th anniversary of the Columbus voyage.

"I started cooking using only New World ingredients just to see what it tasted like unadulterated by the Old World, sort of like what Robert Hingler does," he said. "People would say, 'You should start a restaurant. This is really interesting, unique food.'"

Though the Washburn University English professor, author and radio personality (you may have heard him as commentator William Jenning Bryan Oleander on Kansas Public Radio) didn't feel up to opening a real restaurant, he didn't abandon the idea completely.

"I knew I could have a restaurant if it was a fictional restaurant," he said.

Thus was born the Tsil and its adventurous offerings: vanilla buffalo with cranberry-chile pesto, black bean and gooseberry enchiladas and tortillas fritas with sweet habanero salsa.

And lots of chile peppers. In fact, the cafe is named after the Hopi kachina, which carries a yucca stick in one hand, red chiles in the other, and runs in ritual races in the Hopi culture. When the Tsil kachina overtakes a runner, it stuffs peppers in the runner's mouth -- much like Robert Hingler stuffs habaneros, jalapenos and chipotles in his customer's mouths.

Although Averill has a stronger-than-average tolerance for the heat of chiles and has eaten all the types mentioned in his book, he has not partaken of the most exotic -- some might say revolting -- ingredients that show up at Robert Hingler's 50th birthday party celebration.

"I would confess to being an adventurous eater, and I would confess that if someone offered me any of those things, I would gladly eat them," he said. "But there's not a recipe in there for dog or guinea pig, so I just did my best to imagine them."

Wes literally grows up sleeping in the kitchen, absorbing what he respects from each of his parents and melding that knowledge with dashes of his own ingredients to form the chef and the man that he becomes.

"Food has been everything to my family: from seduction, to individuality, to anger, to love. Now it was me," Wes observes.

"My goal in the book was to show a group of people who, like families, are sort of stuck together. Of course, when you're born into a family, you have to learn to understand it," Averill said. "My goal was to show people coming to an understanding of that and learning as much as they could about who they were in a particular context of family or place or a restaurant or their own past."

In that way, the book resonates universally, whether or not food has been as strong a part of readers' lives as it has the Hingler's.

"Its focus on the use of food as a metaphor as you examine this interestingly intertwined family and this coming-of-age for the young man in the book: It holds a lot of possibilities for discussion about multicultural families, about ethnic food, about the connection between food and modern culture," said Bruce Flanders, director of the Lawrence Public Library, which helped organize Read Across Lawrence.

The program, now in its fourth year in Lawrence, is modeled after a similar one launched in 1998 in Seattle.

"I think it's really noteworthy that we were one of the first groups to copy this idea," said Sandra Wiechert, the library's community relations coordinator. "I think the community enjoys it. This year, there's going to be a far greater impact. The idea has taken off, and far more people are checking out the books."