New York — There are times when Eason Jordan, CNN's chief of newsgathering logistics, can relate to the generals preparing for a possible war in Iraq.

He's already sent hundreds of "troops" to combat school, he commands the movements of eight armored vehicles and controls enough electronic equipment to suck up a power plant's worth of energy.

For months, the broadcast and cable news networks have been readying themselves for a conflict that may, or may not, take place.

CNN, expected to send more journalists into the region than any other American network, has budgeted a reported $35 million for war coverage.

On executives' minds: Daniel Pearl; the experiences of Sept. 11; a new generation of technology; and a potential thawing of television news' relationship with the Pentagon.

Combat school is a new wrinkle for many news organizations. Training programs are run by former military personnel to teach journalists how to avoid dangerous situations and protect against chemical attack.

"It's important because of the unknowns in this particular war," said Marcy McGinnis, senior vice president of news coverage at CBS. "One is the Daniel Pearl issue -- one of the training bits they address is the issue of being kidnapped and how you deal with being a hostage."

Pearl, a former Wall Street Journal reporter, was abducted and killed a year ago in Pakistan while researching a story on Islamic militancy.

CBS has sent about 70 people through the training; CNN about 450. ABC and NBC staff members have also gone through these programs. 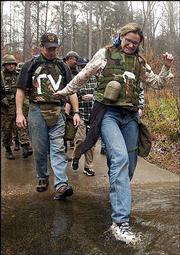 Pam Hess, a UPI correspondent covering the Pentagon, grimaces as she steps into a cold stream on a five-mile march at the Quantico Marine Corps Base in Quantico, Va. The march ended a weeklong military training seminar where journalists were taught how to survive in combat situations.

Viewers can expect wall-to-wall news coverage on CNN, Fox News Channel and MSNBC if and when war breaks out. The cable networks already air regular programs in anticipation of a conflict.

McGinnis said she expected CBS to air nonstop coverage for 24 to 72 hours if war breaks out. The network's plans -- a lot of live reports during the day from the war zone and lengthier ones to offer perspective in prime time -- recall the pattern used in the four days of commercial-free coverage after the Sept. 11 attacks.

"How the war is conducted will define the extent of coverage, but I think it's fair to say that at the outbreak of hostilities, the commercial networks will go on the air and stay on the air for quite some time," said Bill Wheatley, vice president of NBC News.

Since the Gulf War, broadcast satellite uplinks have become smaller and easier to move. The videophone is now a common television tool; a reporter can go on the air from virtually anywhere.

And unlike the Gulf War or the war on terrorism, news organizations are expecting a chance to see more of the action.

Several of the news executives say they sense more cooperation from the Pentagon than in recent conflicts. They expect journalists to accompany military personnel on missions, with the understanding that nothing will be revealed that could put people in danger.