Old Saybrook, Conn. — People who knew her in life and others who just felt they did by watching her in movies remembered Katharine Hepburn as a model of patrician class -- who always maintained a common touch.

"She was one of us," said Barbara Maynard, a longtime Hepburn friend in Old Saybrook -- where Hepburn died at age 96 Sunday at her longtime home with family and friends by her side.

After news of her death spread, dozens of admirers gathered near Hepburn's home, and several bouquets of flowers were left at the end of her driveway, which was blocked by police cars Monday morning.

In Hollywood, flowers, candles and a 6-inch Oscar-like trophy that read "Best Mom" piled up on her star on the Walk of Fame on Sunday.

Kaz Mieis, 33, who is homeless, sprinkled green confetti-like stars over the makeshift memorial. She then lit two candles on the star.

One fan left a card that read, "A real lady, a true star, you will be missed."

Elizabeth Taylor counted herself among admirers.

"I think every actress in the world looked up to her with a kind of reverence and a sense of, 'Oh boy, if only I could be like her,"' Taylor said in a statement. "We never looked at her with envy or jealousy because she worked with such grace and wit and charm. You only wish that one day you could be like her. I am so glad that she and Spence (Spencer Tracy) are finally together again."

President Bush and first lady Laura Bush, who were at their Texas ranch over the weekend, expressed their condolences to Hepburn's family. 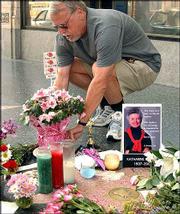 Michael Kullerman adjusts the flowers he brought to the star of Katharine Hepburn on the Hollywood Walk of Fame in Los Angeles. Hepburn died surrounded by friends and family Sunday at her childhood waterfront home in Old Saybrook, Conn. She was 96. Kullerman, visiting Hepburn's star Monday, said he met her 30 years ago and described it as an extraordinary experience.

"Katharine Hepburn delighted audiences with her unique talent for more than six decades," Bush said. "She was known for her intelligence and wit and will be remembered as one of the nation's artistic treasures."

Sen. Christopher Dodd, D-Conn., said Hepburn was "a unique and shining star who lit up the silver screen for generations of Americans and people worldwide."

Michele Sullivan, a spokeswoman for Gov. John G. Rowland, said plans for a remembrance have not been set.

"It's a sad day in Connecticut to have lost such a special person who was more than an icon and an actress, but was a wonderful, caring lady whose recognition of achievement, success and legacy is known by people of all ages," Sullivan said. "May we remember Katharine fondly as one of Connecticut's finest."

Maynard said what she will miss the most is "just knowing that she is here."

"Of course, we can always see her movies," she said.

In New York, the lights will dim on Broadway at 8 p.m. today in honor of Hepburn, said Patricia Armetta-Haubner, a spokeswoman for the League of American Theaters and Producers.

Maynard said Hepburn aided the town in many ways. She helped the town buy property along the shore for a waterfront park, and she donated a fire engine to the local department. And she made anonymous gifts in the community, she said.