History as a series of scenes 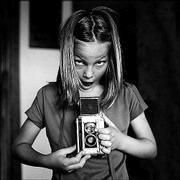 Documenting a life with a camera can be one way of communicating the simple stories that make up the everyday lives of people. MyStory, a series of workshops this summer in Lawrence, will be aimed at helping people relate the stories of their lives in writing, photography, textiles and preservation. Journal-World chief photographer Mike Yoder, who will give workshops on photography and informal portraiture, snapped this family photo of his wife's niece during a Christmas holiday.

Barbara Curry had a story to tell.

She was the main character -- just out of college, homesick and stranded in Arizona, teaching Japanese-American youngsters interred in camps after the war.

She heard "White Christmas" on the radio, and her plan to stay a full year before visiting her family in Kansas City went soft. A friend arranged for her to take the train home in time for the holiday, but when she arrived at the station, the train was late.

"So I sat down and went to sleep and missed my first-class accommodations to Kansas City, which was quite a disappointment," the 81-year old Lawrence woman recalls.

It's a simple story. But it's like so many simple stories that make up the everyday lives of everyday people everywhere.

The aim of MyStory, a series of workshops spread across July, August and September in Lawrence, is to cull those tales from the memories of area residents through writing, photography, quilting and other means of recording.

This is the second year for the series, which is sponsored by Douglas County Senior Services, the Lawrence-Douglas County Housing Authority and the Lawrence Public Library. Like Curry, who's part of a creative writing group at the Senior Center, most of last year's participants were in their 60s, 70s and 80s, but the series is open to everyone. It's built upon the premise that people are natural storytellers and history is best recorded by the experiences of people who lived it.

That was Charley Kempthorne's thesis in the late 1970s when, with a creative writing degree from the University of Iowa's prestigious Writers' Workshop in hand, he started teaching elderly folks in Manhattan how to write their personal histories. In the mid-1990s, one of his most prolific students, Jessie Foveaux, catapulted herself and Kempthorne to national fame with her story of raising eight children as a divorced mother in the 1940s. The Wall Street Journal told Jessie's story, and she ended up with a $1 million advance to publish her memoir, "Any Given Day."

Now, Kempthorne gives personal history writing workshops across the country, though he's doing less and less of them these days, and will return for Lawrence's MyStory after a successful appearance at last year's event.

During his three-day workshop, set for July 8-10 at Babcock Place, Kempthorne will teach participants how to recognize family experiences that help illustrate who they are and then record them using a narrative writing style.

"I'm 65; once you get about that age ... you begin really to think about your past because, as one old fellow told me one time, 'Most of my future's behind me,'" says Kempthorne, founder of the LifeStory Institute and author of "For All Time: A Complete Guide to Writing Your Family History." "So you start reminiscing. Partly I think that's almost a biological impulse, but also I think there's a great urge to pass onto the next generation if not what you learned, what you tried to learn or what you saw and felt in the course of your life."

One of his tricks to get people started involves asking them to draw a floor plan of the house in which they grew up. He asks them to jot down the memories that invariably flow as the drawing emerges. Then he has them choose one memory and recount it as a scene (after all, he says, history is really just a series of scenes, like in a movie).

"They get excited about it because they are really there again," Kempthorne says. "It's 1926 in rural Kansas, and they're right there on the farm, and they see dad, and they see mom and brothers and sisters and so on."

Lawrence quilter Marla Jackson will give a workshop on communicating personal histories through quilting during the MyStory series. Her program is scheduled for 9 a.m. to noon Sept. 9-10 at the Douglas County Senior Center, 745 Vt.

To ease people's natural hesitancy to write, he tries to emphasize that the point is to preserve a part of yourself for your family.

"You're not writing for posterity in a general way. You're writing to give something to your children and your grandchildren," he says. "They want you to sound like you ... warts and all, and they'll take what you give them."

Jessie Kwatamdia, adult education specialist for senior services, says she encounters lots of older people who want to pass along pieces of their lives but aren't sure how to do so.

"I think as seniors they are yearning to tell their family members who they are and how they evolve and what they've been through and what their heritage is and how to make the link from the grandparents down to the grandchild," she says.

"People had a lot of beautiful stories," Kwatamdia recalls.

She hopes even more are revealed this year, with the addition of workshops on photography, textiles, preservation and intergenerational writing.

A look at the complete schedule for MyStory, a series of workshops designed to preserve personal histories. Events are scheduled from July 8 through mid-September. Several dates are not finalized and will be announced later.Pre-registration is required for all programs; a fee is required for a few. For more information and to register, call the Leisure and Learning Department of Douglas County Senior Services at 842-0543.