Los Angeles — With a squeaky voice like a leaking balloon, a pudgy baby-face that looked perpetually stunned, and a fleshy body shaped like a fireplug, Buddy Hackett defied the world not to laugh at him.

As a child, the laughs were unwanted. He was taunted by his peers, but found he could counter them by acting silly. If he was going to be the butt of a joke, at least he could be the one telling it.

Whether he was dancing and singing the silly song "Shipoopi" as the con-man's sidekick in "The Music Man," cracking raunchy jokes to Las Vegas nightclub guests or lending his blustery voice to a frantic seagull in "The Little Mermaid" cartoon, Hackett always aimed for the funnybone.

Even Hackett's family said they weren't immune to his shtick. "If I was going to a corporate job somewhere, I'd call him up, and he'd rattle off 10 jokes," his son, Sandy Hackett, 47, recalled.

The elder Hackett appeared for more than 50 years as a top act in nightclubs, in Broadway shows, on television and in movies.

Apart from 1962's "The Music Man," Hackett also made his mark in film with the car-race comedy "The Love Bug" in 1968 and as a treasure-seeker teamed with Mickey Rooney in the 1963 epic comedy "It's a Mad, Mad, Mad, Mad World."

Among his other movies: "Fireman Save My Child," "God's Little Acre," "All Hands on Deck," "The Wonderful World of the Brothers Grimm" and "Muscle Beach Party."

Hackett was born Leonard Hacker in a Jewish section of New York City's borough of Brooklyn. He began his career on the Borscht Circuit in the Catskill Mountains, where he learned to get laughs with complaints about his roly-poly shape. 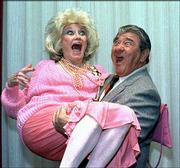 Comedienne Phyllis Diller gets a lift from emcee Buddy Hackett prior to a 1985 celebrity stag luncheon roast at the New York Friars Club. Hackett, the squat, round, rubbery-faced funnyman who appeared for more than 50 years as a top act in nightclubs, Broadway shows, on television and in such movies as "The Music Man," "The Love Bug" and "It's a Mad, Mad, Mad, Mad World," has died, his son confirmed Monday. He was 79.

His career grew with appearances on the TV shows of Jack Paar, Arthur Godfrey and others. Soon he was making big money across the country, and audiences called for his most noted routine, the Chinese waiter.

His live shows were later advertised as "For Mature Audiences Only," and he became one of the first comedians to switch from a family-friendly act to a more risque show full of four-letters words.

"Buddy was a leading funnyman of our time," said Irwin Schaeffer, president of the Friars Club of California, a popular hangout spot for comedians. "(He) always could be counted on to ignite our celebrity roasts with his breakthrough comedy, witty humor and raunchy jokes."