Browse the racks at Mass Street Comics and you'll see a slew of big-name comic books. "Batman," "Superman," "X-Men" and more are all there, but such well-known titles often outshadow the work of local, small-press writers.

However, in August it won't be quite as hard to get your hands on the work of local comic book creators. That's because the Kansas City Comic Creators Network is in the midst of creating the "Show and Tell" anthology, a collection of two- to five-page comics chronicling the talents of local creators.

"We'd just like to get our artwork out there," says Mark Stinson, director of publishing for Comic Creators Network. "There are a lot of members of the group that can't afford to individually publish or don't have the time to produce enough material to be worth individual publication. The anthology provides a forum for everybody to be published in a smaller format."

The anthology is scheduled for release in early August -- just in time for the annual Wizard World Comic Convention in Chicago -- and the deadline for entries is July 15. Only Comic Creators Network members may submit their work, but membership is open to anyone who can cough up the $20 annual fee.

Stinson first kicked around the anthology concept after a trip to a comic convention in Ohio, where he ran across another local anthology called "Panel." He believes a published anthology could be just what KC's network needs to push things to the next level and help get the Midwest comic scene some nationwide recognition.

"We're here in between coasts and people miss us and don't see that we're here," Stinson says. "Everything we're doing is aimed at saying, 'Hey, here we are. We're here, we're making great comics, and you have to pay attention to us.'"

The anthology is part artistic expression and part membership drive, as organizers expect their ranks to reach close to 50 by the submissions deadline. This is the Comic Creators Network's first time publishing anything, and its focus in the future will be on helping members publish their work both individually and collectively. 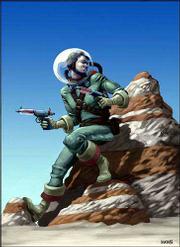 The back cover of the "Show and Tell" anthology was drawn by artist Steve Sanders. This is the first project released by the Kansas City Comic Creators Network.

To hear Stinson tell it, the network has come a long way in a short time.

"This whole thing started a year ago with six people in a coffee shop," he says.

The group's primary focus was, as Stinson says, "just to hang out and talk about comics." That quickly transformed into bigger ideas, such as collecting money, giving grants to creators and getting together a collective table at conventions.

"In the beginning it was just six of us just discussing what it was like to be a comic book creator," says Duane Cunningham, Comic Creators Network chair. "Next thing you know we've got 20 people, elected officers and we really got organized with it."

Part of that organization involved setting up a series of monthly events.

"More than anything we want to provide a rock-solid foundation of events that everybody can come to month after month," Cunningham says. Some of those events include an Internet message board, sketchbook parties, a monthly newsletter and bimonthly writers workshops (with Lawrence comic book luminaries Jai Nitz and Clay Moore, of "Paper Museum" and "Hawaiian Dick," respectively).

Both Nitz and Moore will be contributing to the anthology, as well as other local small-press comic artists like Ed LaValle ("Archeon") and Dove McHargue ("Ulysses"). All four have found moderate success in the comic world, though they're not necessarily mainstream artists. But Stinson says that so-called "alternative" comics like these still have their audience.

"The focus of the Wizard con tends to be superheroes," he says. "But we're hoping that by having a large book with collective work in it we'll be able to draw attention and be able to show our work to a lot of the alternative people." 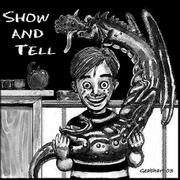 Shawn Geabhart contributed this piece to the KC anthology "Show and Tell."

Comic Creators Network directors have deemed that the material within "Show and Tell" be equivalent to that of a PG-13 rating, as Cunningham says, "to keep it from being too racy, so we can have the biggest audience right off the bat."

Outside of the anthology, Cunningham and Stinson have lofty ambitions for the network, though they admit much of their ideas are still in the planning phases. Aside from workshops on writing and self-publishing, one of their biggest goals is starting a grants program. Though the fund-raising details haven't been finalized, the network would like to give away $1,000, with $100 monthly micro-grants going toward things like supplies and printing.

For now, the group will trudge on, meeting at the Crave Cafe in Midtown KC, planning its anthology, holding workshops and trying to make it through organizational growing pains as easily as possible.

"Really our goal is just to get people to meet up and work together," Cunningham says. "We try to provide a fun environment for everybody where they can kind of get in touch with their inner comic artist."