Frank Griffin is content with things the way they are -- he's satisfied with the life he and his wife, Ellen, and 8-year-old daughter, Zoe, have made for themselves in Oak Park, Ill.

In the opening of Elizabeth Berg's novel "Say When," Griffin knows that Ellen is seeing someone else. But he's unprepared for the chaos his life lurches into when Ellen tells him one morning that she's in love with another man and wants a divorce.

"Say When" follows Griffin through his struggle to understand Ellen, a shy, free spirit whom he has loved for 20 years but has never truly known.

At first, Griffin stubbornly refuses to accept the separation, but Ellen eventually packs her bags and moves out, leaving him to wrestle with denial and longing, anger and regret.

Anguished and ambivalent, Griffin seeks solace at the local mall, where he takes a temporary job as a Santa during the holidays -- a job Berg researched in part by reading piles of children's letters to Santa.

Berg masterfully explores how meaning is infused into the details of daily life, from the symbolic choice Zoe must make between Ellen's pot roast and the takeout fried chicken Griffin has picked up on his way home, to the awkwardness of ringing a spouse's doorbell when "separated."

As the story progresses, a drift into disorder is palpable -- Griffin splashes the water in Zoe's bath over the side of the tub; an ice cream sundae grows to such mammoth proportions that it makes Zoe sick.

As a character, Griffin lacks the depth and intensity of Samantha Morrow, the spunky heroine of Berg's "Open House" (2000) -- in part because Berg tells Griffin's tale in the third person, leaving an emotional gap between him and the reader.

But the distance befits the tale of Griffin, a computer consultant who is used to suppressing his feelings.

And the book's most tender moments come when Griffin's emotions are bared, as he realizes the ways he has neglected Ellen's fragile spirit and tries, clumsily and uncertainly, to change. 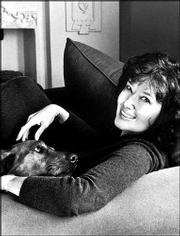