Love for outdoors results in many trips to national sites

Arthur Shaw's hobby has taken him pretty far afield through the years.

Shaw, known around town as "Artie," loves visiting national parks -- that is, he REALLY loves it.

Shaw, 74, has taken nearly 100 trips in which he has gone off in search of new scenic vistas. Sometimes family members or friends have accompanied him, and other times he's undertaken these journeys on his own.

But the bottom line is impressive: Since 1962, by his own accounting, Shaw has visited 360 of the 388 national park sites in the 262 million acres of public lands administered by the U.S. Department of the Interior. Along the way, he has been to every state in the union, plus American Samoa.

But Shaw isn't finished. His latest trip, in which he'll visit Washington, Oregon and Idaho, will give him the opportunity to cross five more park sites off the list.

"It's been a hobby, and it's been a passion. There's never been such a thing as a bad trip," says Shaw, a retired clinical psychologist who has lived about five miles northeast of Lawrence since 1952.

He has documented all his trips, both in a ledger in which he has carefully noted the dates and locations of his travels, and in thousands of photos that spill from boxes kept in his living room.

The notes and pictures, apart from helping Shaw keep track of where he's been, serve as a record of family history, tracing the early years of his five children, as well as his own maturity across four decades.

The Brooklyn-born Shaw is, in some ways, most at home when he's on the road to another destination among the national parks and related sites. 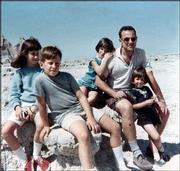 Artie Shaw, second from right, poses with his children, Debbie, Alan, Risa and Leah in 1967 during a trip to the Black Hills in South Dakota. Shaw has visited 360 national park sites since 1962.

"I love the outdoors. I love to hike. It's wonderful for the spirit in all sorts of ways. It's a time to do a lot of reflecting and just being. My kids have said it's when I'm the most fun to be with," he says. "The thing that tells me I did something right is that now my kids are taking their kids on trips to national parks."

Shaw's interest in the national park system was first sparked -- perhaps that's the wrong word for it -- when he worked during the summer of 1952 as a firewatcher in a 50-foot observation tower in Kaniksu National Forest in northern Idaho.

At the time, he was on break from graduate school at Kansas University, where he was earning his doctorate in clinical psychology.

Shaw lived in a 14-square-foot room, surrounded by a catwalk, with his first wife, Jean, for 10 weeks.

Artie Shaw, Lawrence, displays a mask he obtained during his trip to Nunamiut village in Alaska.

But it wasn't until the couple started building a family that Shaw began his adventures in the national parks.

"I decided the kids were old enough (in 1962), and it was time to go camping. We bought tents and cooking gear and sleeping bags, and we headed to Rocky Mountain National Park in Colorado," he says. "When the kids were young (Shaw has five children), we didn't have any money, so camping was the only way we could do it."

A black-and-white picture from that era shows the family outside their home on Ohio Street, packing an impossible amount of camping equipment into a Volkswagen bug.

Sometimes they took the family dog, too -- a Labrador retriever named Pierre.

"The main thing is that we started a family tradition. As each kid would turn 6, they would go on a 5-mile hike with Dad," Shaw recalls.

The trips soon accumulated, becoming an important part of the texture of the family's life.

"We did it because it was just such fun to do. We got to have great experiences in such wonderful places. Whenever we were going somewhere, we would route the trip so that we would go through park sites," he says.

Sometimes the outings didn't always go as planned, but that was OK, too.

"There have been tough experiences. Like along Lake Superior at sundown, when the mosquitoes came out in the thousands -- chasing us back to the car, literally," Shaw says.

"There were times when the rain kept us pinned down in a tent; that's not fun. But it's part of the whole experience. When you have problems with nature or your gear, it makes for great memories." 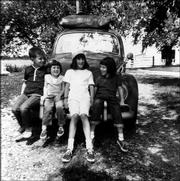 The Shaw family's early trips to national park sites were taken in a Volkswagen Bug. In this 1966 photo, four of the children pose on the car's bumper before hitting the road.

Today, Shaw's children -- all of whom were born and grew up in rural Lawrence -- lead far-flung lives in cities around the country.

Debbie, 47, lives near Boston; Alan, 46, lives in Atlanta; Risa, 43, has settled in Washington, D.C.; Leah, 39, is in Littleton, Colo.; and Jennifer, 32, is in the process of earning a doctorate in medical anthropology at Case Western Reserve University in Cleveland.

Jennifer has continued to take trips to national park sites with her father from time to time. The two took a memorable, three-day trip last summer to Katmai National Park in Alaska.

"She was immediately turned on by it. She'd never been to Alaska, but she'd heard a lot about it (from other family members)," Shaw says.

Jennifer loved it so much, in fact, that she is now working as a seasonal volunteer with the National Park Service at Katmai. She's there for 17 weeks.

"When she got accepted for this job, she called me. She said, 'Dad, when you were taking all of us to national parks, were you planning on one of us becoming a park ranger?' That was her way of introducing it to me," Shaw says, chuckling.