Los Angeles — Buddy Ebsen, the loose-limbed dancer turned Hollywood actor who achieved stardom and riches in the television series "The Beverly Hillbillies" and "Barnaby Jones," has died, a hospital official said Monday. He was 95.

Ebsen and his sister Vilma danced through Broadway shows and MGM musicals of the 1930s. When she retired, Ebsen continued on his own, dancing with Shirley Temple in "Captain January" and turning dramatic actor.

Except for an allergy to aluminum paint, he would have been one of the Yellow Brick Road quartet in the classic "The Wizard of Oz." After 10 days of filming, Ebsen, playing the Tin Man, fell ill because of the aluminum makeup on his skin and was replaced by Jack Haley.

As Jed Clampett, the easygoing head of a newly rich Ozark family plunked down in snooty Beverly Hills, Ebsen became a national favorite. While scorned by most critics, "The Beverly Hillbillies" attracted as many as 60 million viewers on CBS between 1962 and 1971.

"As I recall, the only good notice was in the Saturday Review," Ebsen once said. "The critic said the show possessed 'social comment combined with a high Nielsen, an almost impossible achievement in these days.' I kinda liked that."

Ebsen returned to series TV in 1973 as "Barnaby Jones," a private investigator forced out of retirement to solve the murder of his son Hal, who had taken over the business.

"Barnaby Jones" also drew critical blasts. But Ebsen's folksy manner and a warm relationship with his daughter-in-law, played by Lee Meriwether, made the series a success. 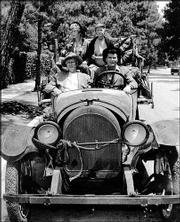 The cast of TV's "The Beverly Hillbillies" are shown riding in their car in this May 19, 1967, file photo. Shown are Buddy Ebsen, front left, Max Baer, front right, Donna Douglas, rear left, and Irene Ryan. Ebsen died Sunday at Torrance Memorial Medical Center in Torrance, Calif., a hospital official said Monday. He was 95.

"With such a glut of private-eye shows, I didn't see how another one could succeed," Ebsen once said. "I really thought the network was making a mistake." But the series clicked and lasted until 1980.

In 2001, Ebsen started a new, unexpected career: fiction writing. His novel "Kelly's Quest," released by an e-book publisher based in Indiana, became a best seller. He also penned an autobiography, "The Other Side of Oz." 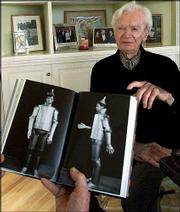 Ebsen points to a book that shows him wearing the costume of the Tin Man character from "The Wizard of Oz" in this May 24, 2001, file photo. Ebsen had to quit the role because he was allergic to the aluminum paint.