For a man forever tied to the Holocaust and the cause of world Jewry, Otto Frank -- the father of Holocaust diarist Anne Frank -- went through life carrying a sense of constant ambivalence.

Now, with this probing and insightful book by Carol Ann Lee, we may know why.

While it would be going too far to call Frank a "collaborator" with the Nazi government that eventually sent him and his family to concentration camps, he nevertheless did business with the German army occupying the Netherlands.

Frank also worked with Dutch sympathizers of Hitler's Third Reich and traveled in circles that ultimately led to his family's capture after almost three years in hiding in the annex above their Amsterdam business.

In "The Hidden Life of Otto Frank," Lee shows much that Frank wanted to keep hidden and much that explains the arm's-length attitude with which he handled many of the accolades after he returned from Auschwitz, found his daughter's diary and published it. While Anne Frank's account of life in hiding captivated the world and made her and her father venerated figures, he never truly embraced his new role as survivor icon.

As Lee explains, Frank was more a German who happened to be Jewish than a Jew who happened to have lived in Germany. During World War I, Frank was an officer in the German army; he relished his military service. He moved his wife and two daughters, Margot and Anne, to Amsterdam in 1933 only because he didn't want his family forced into a Jewish ghetto.

While moving allowed him to keep his own business and kept his family free from the insidious laws that dominated the lives of German Jews until the outbreak of war, it also put Frank into a world of Dutch Nazi sympathizers and ne'er-do-wells who would eventually betray the Franks to the Germans in 1944.

He hired Jetje Jansen, a Dutch woman whose husband eventually joined the Dutch Nazi party and thought his wife was having an affair with Frank. "Otto's uncomplicated decision in 1935 to employ the Jansens would lead him into a situation that has never previously been documented -- a maze of blackmail, terror, and despair," Lee writes.

Later, Frank started a business relationship with Tonny Ahlers, one of the losers in life who often turned to the Nazis for a scrap of power. Through Ahlers, Frank sold pectin to the German army, even after it conquered the Netherlands. It was, Lee writes, "a pact with the devil, but the price can scarcely be imagined. In working with the enemy, Otto hoped to protect not only his company but also himself and his family, for by then most Jewish people realized something of the immense danger that faced them." 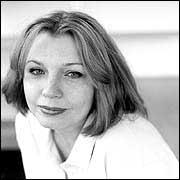 Carol Ann Lee wrote "The Hidden Life of Otto Frank," published by William Morrow. The novel tells the story of Anne Frank's father, who is forever tied to the Holocaust and the cause of world Jewry, and how he did business with the German army and Dutch sympathizers of Hitler's Third Reich.

Lee shows that Ahlers knew the location of the Franks' hiding place from the beginning, and through thorough research and interviews with Ahlers' children, shows how he ultimately betrayed the Franks. Later, after the Allies freed him from Auschwitz and Frank returned as his family's sole survivor, Frank vouched for Ahlers when the Dutch authorities targeted him after the war.

Throughout "The Hidden Life of Otto Frank," Lee presents her facts clearly and without hyperbole. She also reserves passing judgment on Frank. War does terrible things to people, and Frank made his choices not out of malice but naivete. In many cases, he doesn't seem to have thought out what his decisions would bring.

In the hands of a less-skilled writer, some of the details here would be the stuff of tabloids. It's to her credit that Lee resists that temptation and tells a fascinating story about a man thrust into history through forces beyond his control and who then grappled to make sense of his new status.