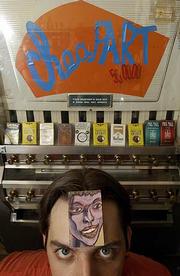 Scott Stewart, one of 20 artists involved in cheapart.

Smoke 'em if you've got 'em, the saying goes.

But what happens if you replace your standard 20 cigarettes with artwork small enough to fit inside the Marlboro, Camel or Lucky Strike box the nicotine sticks came in?

A handful of Lawrence artists and the Social Service League hope the result is a healthier but just-as-addictive habit called cheapart.

Local creative types have spent several weeks crafting original paintings, photographs, drawings, jewelry and even stone carvings that will sell for $5 (an uncharacteristically low price in the art world) and then scavenging for 2-inch by 3-inch boxes with flip-top lids.

Appropriate packaging is vital because this art isn't destined for a gallery.

Nope, the only place it will be available is a vintage cigarette vending machine in the cluttered Rhode Island Street home of the Social Service League Store.

"When I was growing up, there were cigarette machines everywhere, and it was cheap enough to buy," said Jean Ann Pike, manager of the store at 905 R.I. "Cigarette machines are disappearing. They're a great old piece of history. Let's do something positive with them. Let's get some more artwork out there right in front of people, make it as accessible as cigarettes were."

Pike got the idea for cheapart after reading a national wire story about Art-o-mats, the brainchild of a young Winston-Salem, N.C., artist named Clark Whittington. He was the first to convert a recently banned cigarette vending machine into an art dispenser. It sold his black and white photographs for $1 each.

Today, more than 300 artists from 10 countries sell art from nearly 50 Art-o-mats around the country. Most are clustered on the East and West coasts, though Chicago and Houston have machines of their own.

So the League's cheapart machine is believed to be the first in the Lawrence area. It will be unveiled today during a reception from 4 p.m. to 7 p.m. at the store. The event will help celebrate the 125th anniversary of the League, which provides clothing, eyeglasses, shoes, food and other necessities to Lawrence folks in need. 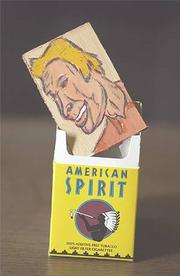 Proceeds will go back to the artists this time around, but a road show may be in the cheapart machine's future. Pike looking into the possibility of finding artists willing to keep the machine stocked with donated work and then rotating the heavy steel contraption among Lawrence businesses, with proceeds coming back to the League.

"You've got the energy of artists all over Lawrence who are all coming together to help out an organization that's been around over 100 years," said Larry Northrop, president of the League's board.

Unlikely transformation
The cigarette machine and its nicotine-coated innards have undergone a facelift since their days parked just inside the front door -- next to the Playboy pinball machine -- at the Replay Lounge.

Pike scraped off a thick layer of band stickers and restuck them to a piece of cardboard in much the same way they came off -- kind of a commemoration of the machine's 8 1/2 years at The Replay (though markings on the machine indicate that its life began back when cigarettes cost 45 cents a pack). Names like Filthy Jim, Controlled by Plague, Toy Zebra and Tricky documented appearances -- or at least fans of the bands -- at the tiny venue.

Pike was a little less nostalgic about the layers of cigarette smoke, beer and "who knows what else" coating the outside of the machine. The morning after the first night the machine spent in the store, the whole place smelled like a dingy bar.

"We got out the cleaners," she said.

Now the machine gleams (as much as a 50-year-old cigarette dispenser can). The band stickers have been replaced with a cheapart sign. A display board above the machine provides a hint of the work hiding inside the cigarette boxes.

About 20 Lawrence artists, each of whom created about 20 works of art, are represented in the unlikely dispenser.

Most of them aren't used to working on such a small scale, but the biggest challenge has been finding cigarette boxes in which to stash their art.

Nancy Hubble bit the bullet and bought cigarettes at a discount tobacco shop, later dumping out the smokes for their coveted container. An Ace hardware employee who cut wood for Hubble's miniature painting projects agreed to save his cigarette boxes as well.

Despite the challenges of conforming to the cigarette machine genre, Hubble has enjoyed the process.

"I've worked there (at the League) as a volunteer. My son cuts the grass, and my husband's helped out there. We've just been a part of the Social Service League family for a long time," she said. "As soon as Jean Ann mentioned this, I just loved the idea of it. It seems so proper. It's such an antithesis to the vending machine to have original art come through."

'Art habit'
Such was the appeal for Karl Ramberg, a Lawrence stone worker whose contributions to the vending machine are tiny abstract limestone carvings.

"To do art for five bucks, man, that sounds like a lot of fun to me," he said.

"Lord knows we can't make a living doing this stuff, so why even try?"

Artist Dixie Lubin isn't restricting her creativity to what's inside her cigarette boxes.
Her gel-pen drawings and collages, matted so they can be hung with string, will be enclosed in cigarette boxes covered with a label that says "Art Habit" and "Buy a pack a week."

"I think it's a really great idea," she said of the art vending machine. "It makes a little piece of art available to people who can't otherwise afford it. I think that's cool."