Earlier this month, hookandladder keyboardist Jason Barr attended the Cornerstone Christian music festival in Bushnell, Ill. with his friends in the Billions, a local indie rock band with a Christian focus. In his spare time, Barr amused himself by playing games with the young, impressionable crowd.

"I talked to so many people about Marilyn Manson at Cornerstone," he says. "One kid was wearing a Marilyn Manson shirt. I tried buying it from him. I would love to own to own a really old, crusty Marilyn Manson shirt ... No one would really think it's funny, they'd just be like, 'That's really sleazy, why do you have that shirt?' and I'd be like, 'Cause it's awesome!'"

But the highlight of the weekend came when Barr played the hookandladder CD for a 15-year-old punk kid with a Bad Religion t-shirt.

"The exact words out of his mouth were, 'Pretty good. Definitely not awesome, but pretty good,'" Barr says. "In the back of my head I'm just jumping for joy, like, 'You just said the greatest thing I've ever heard.'"

'Carnie-core'
With the release of a new EP -- a split with Kansas City hardcore band Pixel Panda for which each band contributed three songs -- hookandladder is out to prove that it's 'pretty good' or better.

"At times our band was frustrated because we didn't know what people thought of us," Teel said. "We still don't know but now we don't care."

The confusion could be due to the bands' genre-eluding sound: densely layered, dark and brooding funeral dirges inspired by bands like Joy Division, the Cure, Suicide and Pleasure Forever.

Whatever hookandladder's sound may be, the self-titled EP is the first recording to fully realize the band's vision. Producer Lance Attack, who has worked with Reggie and the Full Effect and Appleseed Cast, recorded the band in its North Lawrence practice space.

"It was the first recording we did where we could actually hear ourselves," Barr says. "It made our songwriting more cohesive."

The band also added a sixth member for the recording: Moog organist Paul Browning, who rounds out a lineup that also includes Jeromy Coffman on bass and Joe Noel on drums.

Besides the superior recording quality, hookandladder's second EP stands out because Vermeulen eschewed screaming in favor of singing.

"It's more Joy Division and less Hot Snakes," Vermeulen says of his new vocal style. "I just got tired of doing it -- coming home and my voice being sore. I knew there had to be something better."

Damn fools
The conversation nearly takes an ugly turn when Barr, Vermeulen and Coffman get into a heated argument about whether a band Barr saw could be considered 'stoner rock.'

Barr: "I do know what stoner rock sounds like."

Vermeulen: "Yeah, but then you get into stoner rock and you are really into it and then someone else is like, "All stoner rock sounds the same," and then you're like, 'No way man!"

Vermuelen: "What if I said the Microphones and the Velvet Underground sound exactly the same?"

Barr: "Then everyone would know you're a damn fool and you know nothing about music."

Barr: "I don't care, it's STONER rock, that name doesn't carry a great reputation for integrity."

Coffman: "Well maybe not to you."

Barr: "Did you catch the word 'stoner' as part of the genre? So yeah, I don't think there's a real argument happening right now ... You're a straight-edge guy. I can't believe you're arguing for stoner rock!"

Vermeulen: "The only good music that came out of the sixties and seventies was the result of drugs. There, I said it."

Barr: "Dude, that's fine but this isn't the sixties and the seventies, this is the freakin' ... Dude, welcome to the nineties, man -- pull your head out of your butt."

The band up for debate is Camarosmith, a Seattle band that recently played at the Hurricane in Kansas City. The band is infamous in hookandladder circles because "Camarosmith" used to be hookandladder's name until the Seattle band sent a "cease and desist" e-mail asking the band to change its name.

Though the two bands have ironed out their differences, Barr still seems to derive pleasure from insulting Camarosmith.

"The lead singer looked like the dude that played Beast in 'Beauty and the Beast,'" he says. 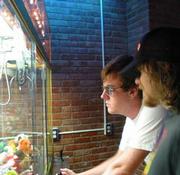 Barr (left) and Teel join one another is a favorite pastime.

Ziggy Barr-dust
Tuesday's release party at La Tasca will be Vermuelen's last show with the band. He will move to New York July 27, where he will look for an architecture job and possibly start a new band.

Vermuelen says he would have taken the band in a whole new direction if he was sticking around..

"I was going to force us to turn into a 10-piece with a string section and auxiliary percussion," he says, only half-jokingly.

As it is, hookandladder will continue with only minimal adjustments to its sound. Teel says the band will not be adding any new members, which leaves one big gaping question: Who will sing?

"I don't know. I think it's him," says Coffman, pointing to Barr. "I'm really curious to see how we do after Devin leaves."

Barr, however, has other plans: playing saxophone.