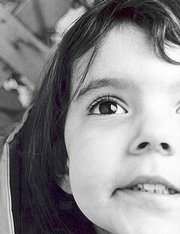 An image can evoke memories or inspire new visions. It can motivate a writer to write. And those written words can lead right back to images for people who think visually.

Students in Angelia Perkins' advanced photography class took shots that they anonymously submitted to Joy Clumsky's creative writing class. The writers selected an image and interpreted it by composing a poem based on the ideas and emotions it stirred in them.

The writers then submitted poetry to the photographers, who were asked to visually transform the words into photographs.

Anticipation, fear, life cycles, celestial bodies and lost innocence occupy the space of these verses. Darkness, light, line and form pull the words off the page and into a visual composition.

Look closely. Read intently. Maybe the art will talk to you.

I had known you in that garden as a girl;

We had shared secrets in the shade,

By that vine-covered fence.

I had seen you through eyes untrammeled,

Ignorant of the world's ignorance,

Sharing secrets in the shade.

As women, we met again,

In that same garden,

Next to the vine-covered fence,

Pricked by a thorn venomous,

Poisoned by the world's hatred.

We stood staring, you and I,

Ignorant of what had been lost.

Her eyes were soft and innocent, 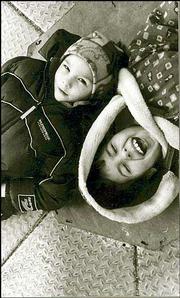 And an accidental clothing creation

Her hands were coated sticky

From popsicles melting and chocolate pudding

That barely managed to enter her eager mouth.

Not caring who heard.

Days were spent asking, "Why?"

As she was readily wanting to discover more.

She had no enemies,

For her mind knew no hate.

And tomorrow she will grow.

Moving through a black, clear sky,

Swirling, twirling, round and round,

The tiny dots of light

Shine down on everything they see.

Constellations all given names

From the old Roman Gods.

Mighty and powerful, they shine brightly.

Shine so brightly, they will live on forever.

Forming back upon themselves,

Swimming through the past,

One wades through the future.

Time is a paragon

Continuing in its propitious rebirth.

Blooming chaos in your blind gaze.

Are born within your breast.

Close the door as life exhales. 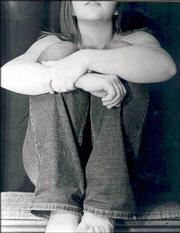 At night she sits upon the sullen bench,

Gleaming white, true as a pearl.

Slated ravens sit perched on fatigued and frail trees above,

Uneasily, she rises from her fixed position;

She treads through the intimidating catacomb-like streets,

Followed by the uninvited, unwanted ravens.

The murky birds do not near, out of fear,

Fear of temptations and fear of lust.

A widow is made where there once was a wife,

And a child is turned to orphan,

And the lumbermen wait for the forest to drain 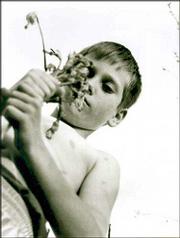 From the rain of the day just before.

Pacing and practicing, life is a game,

Anything that amuses your moments,

Like waiting and watching for change or for trade,

Adjusting to amend, you still force us to attend

All the schedules you never could coordinate.

Withered is the lily, fading with time,

As the people, like flowers, all rot and decay.