Chicago — Joe Cristina is making a pest of himself.

"Are you ready yet? Hey, pick me. I'm your man," he says, grinning at a casting producer who's setting up a video camera in the VIP room of a Chicago bar. It's 10:30 p.m. on a Friday night and already, Cristina and several others are crammed in the hallway outside, peering in anxiously as the sliding doors open and close.

Before the night is out, a select few will twirl before the camera to show off their bodies. They will complete an application that includes such questions as "Are you comfortable in a bathing suit?" and "What are your sexual turn-ons and fetishes?"

And some will share those details on camera -- all in a bid to make it on to "Elimidate," a raucous and sometimes ruthless reality dating show that, even those auditioning ac-knowledge, leaves many participants looking foolish.

So why in the world is Cristina, a recent college graduate who now works for a rental car agency, so keen to audition?

"I'm not going to lie to you -- it's that 15 minutes of fame," the 21-year-old says, giving a nod to artist Andy Warhol's prediction decades ago that, in the future, everyone would be famous for that amount of time.

Now it seems that Warhol's words have come true, or -- at least -- more people than ever want them to be true.

While chasing fame has always been part of the American dream, the quest has turned to frenzy, thanks in part to reality TV, Web cams and "blogging," first-person diaries posted on the Web for all the world to see. Today, even cell phones have cameras that allow a person to e-mail instant photos of themselves to large groups of perfect strangers.

"For years, teens have been standing in front of the mirror, performing with a hairbrush microphone," says Matthew Felling of the Center for Media and Public Affairs, a Washington-based media watchdog. "Now there are multiple industries devoted to showcasing this behavior." 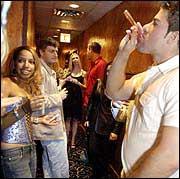 Reality show hopefuls wait outside the interview room at a Chicago nightclub for their turn at a shot on the TV reality dating show "Elimidate." At right is Joe Cristina, who says he is pursing his "15 minutes of fame."

At least one pop culture expert says that access to exposure has helped create a generation of young Americans in love with, as he calls it, "pure, slobbering attention."

"Humans have almost this pathological behavioral characteristic that makes them scream out 'Look at me!"' says Robert Thompson, director of the Center for the Study of Popular Television and a professor at Syracuse University. And he says that urge has never been greater than in it is in today's young people.

Time was, he says, when his students were focused on one thing: making money.

"Now," Thompson says, "given the choice between becoming fabulously wealthy or fabulously famous, most of them choose famous."

Adrienne Katzman, a 23-year-old from Washington, D.C., knows what he means. She fantasizes about being on the CBS show "The Amazing Race," a reality program that features two-person teams racing across the globe.

She's also writing a pop fiction book with a friend in hopes of doing something that will put her "on the map."

"I think fame will give meaning to my life," says Katzman, who works as a corporate fund-raiser. "I mean, who am I right now? A face in a million. If I become famous, then I really will feel like I am someone, and I will have a sense of accomplishment in my life.

Many of those auditioning talk about the thrill of putting themselves out there -- something Katzman understands.

"No one will pay attention to some humdrum love story or hero-saves-the-day story. We need excitement, adventure, something that will keep us drawn in and clinging to the edge of our seats," she says.