Angered by "the elitists" attending a $500-a-plate dinner Monday to see former New York City Mayor Rudolph Giuliani receive an award, Lawrence anarchists took their protest into the streets and clashed with police.

A total of 16 protesters were arrested during scuffles with Lawrence Police near the driveway to the Lawrence Holidome, 200 McDonald Drive.

The protesters, many wearing bandanas that covered their faces, shouted insults at motorists as their cars pulled into the Holidome driveway.

"It better be a gold-plated dinner," another responded.

The dinner was in conjunction with this week's dedication of the Dole Institute of Politics on the campus of Kansas University. During the dinner, Giuliani received the Dole Spirit of Leadership Award.

A man identifying himself only as "Chubby" decried Giuliani, Dole and those attending the dinner as elitists who were allowing children to starve and workers to lose their jobs.

He and others also said they were protesting government cuts to social services, which were putting an additional burden on people already hurting because of the poor economy.

"We can no longer afford not to do anything," Chubby said.

He was one of the first three people arrested during the scuffles with police near the Holidome.

The protesters tied up traffic as they marched from the park north on Rockledge Drive and McDonald Drive. They carried what appeared to be orange road construction barrels cut in half to be used as shields and were bearing protest signs.

Others carried large boxes filled with paper trash. On the front of the boxes were pictures of Dole, Giuliani, President Bush and Dole Institute director Richard Norton Smith. The word "tyrant" was scribbled over the photos.

Just south of the Holidome, the group was met in the middle of the road by Police Chief Ron Olin, while about a dozen police officers stood nearby in the driveway.

During an interview later, Olin said he offered the group a chance to protest along the east side of the street near the Holidome where they could still be seen. Twice the group walked around him, and officers moved in to stop them at the driveway.

"The decision was made at that point to stop them right here -- that we could not block the Holidome," Olin said. 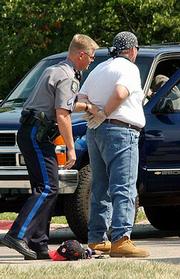 Protest Marchers headed to the Lawrence Holidome around 4:00 p.m. Monday afternoon, only to be greeted by the Lawrence Police, the Kansas Highway Patrol, and Secret Service Agents. Police arrested a protester who gave his name at Chubby before being was arrested.

Olin declined to say whether Holidome management asked that the group be kept off the property, saying he would not discuss security arrangements.

At the time of the first scuffle, however, a man in a dark suit who was standing near police officers was heard to shout that the group needed to be "stopped now."

Protesters later gathered on the west side of McDonald Drive in front of the Kansas National Guard Armory, across from the driveway.

Later clashes occurred when the protesters put up their orange shields and tried to move across the street, when a smoke bomb was tossed at police and when a water bottle was thrown.

Protesters also repeatedly chanted "This is what a police state looks like."

Protesters blamed police for reacting with more force than necessary. So did some onlookers. A few members of the Lawrence Coalition for Peace and Justice accompanied the marchers and stood by to monitor and document police actions.

"They're doing their job protecting the Holidome property, but it was much more force than necessary," said a woman who declined to give her name.

One of the protesters, Ralph Earles, 61, who held a sign that read, "No $ for War," said he thought police tried to arrest some of the more vocal protesters as an effort to discourage the rest.

"I know some of the people they picked out were involved in getting people to come speak up," Earles said.

"We were very restrained," Olin said of police efforts.

Earlier this year during protests against the war with Iraq, anarchists moved onto streets blocking traffic for several minutes in downtown Lawrence. Police in those cases stood by and redirected traffic.

"It was really becoming a hazard to the people, motorists (were) becoming upset," Affalter said. "For everybody's safety, we needed to open that route."

Later Monday night, the anarchists regrouped outside the Douglas County Jail to demand the release of their comrades.

Protesters with other groups gathered nearby, including three women dressed as Rosie the Riveter who carried "support the troops" signs.