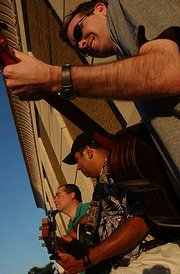 Anybody who thinks Ricky Martin puts on the sexiest Latin music performance has obviously never been to a Son Venezuela show.

"There've been the girls that get seduced by the sound of the Latin music and they take it to the next level -- sexiness out of control," lead vocalist Kelfel Aqui says. "We've had girls that start grinding with band members; that's not very popular with the wives."

Such is the burden of being Kansas' most prolific Latin dance band.

With four to 10 shows a month and sellout crowds packing the clubs lucky enough to book the band, Lawrence's Son Venezuela is approaching a decade's worth of performing with enough fire to keep the dance floor burning and enough new material to keep Latin music fans on their toes.

"It's very flattering to see musicians coming to our shows," Aqui says. "Last time we played here it was crazy how many musicians were seeing us ... hardcore, glam rock, jam bands, reggae bands. We are a musician's type of band."

The core of Son Venezuela formed in 1991 as "Folklore Venezuela," a quintet with guitar, mandolin, cuatro (a four-string guitar), bass and percussion. The group performed at colleges and festivals, teaching audiences the history of Venezuelan folk music.

Aqui had come to Lawrence from Venezuela at age 17 to study sociology at Kansas University. His musical background was not in folk or salsa music, but in rock 'n' roll.

His first concert in Venezuela was Queen.

"I think they traveled with a gong that weighed 4 tons just to be played for 4 seconds at the end of 'Bohemian Rhapsody,'" Aqui recalls.

Keyboardist Marc Marcano also developed his love of rock while growing up in Venezuela. He followed that passion to the United States, gigging with Mitch Ryder and Lynyrd Skynyrd guitarist Steve Earl Gaines. Marcano attended one of Folklore Venezuela's shows at the defunct Coco Loco and offered to join as a bass player.

"It brought back a lot of memories from my childhood," says Marcano, who switched to keyboard in 1995. "It was hard to keep a rock 'n' roll band together because someone was always pissed off or jealous. Now, it's all about the music -- watching people dance and finding out that nine guys can actually get along for 10 years."

With the addition of a bass player and horn section in 1995, "Folklore Venezuela" became "Son Venezuela:" a full-fledged Latin dance orchestra. The band sold out its first bar gig (at The Jazzhaus) and has since taken on a demanding schedule of club shows, festivals and private parties.

Aqui attributes much of the band's success to tireless promotion.

"Yesterday we were playing Kansas City and everybody had a stack of handbills for the next show," Aqui says. "The other thing that helps out is that I doubt that there is going to be a prettier crowd, and that attracts a lot of cool cats wanting to meet pretty Latin girls."

Aqui might be the only musician in Lawrence to shake his head in disapproval at "only" having six hours worth of material.

"Up until six months ago we probably had enough material to do almost two nights without repeating songs," he says. "Now we could do another whole night with completely new material."

Aqui is reviving the educational focus of Son Venezuela's early days by teaching a three-part course on the history of salsa music on Fridays at 9:30 p.m. at La Tasca, which he owns and operates.

The course, called "Salsa 101," covers the evolution of the Afro-Cuban beat and its permutations, including, but not limited to: salsa, cha-cha, rhumba, mambo, merengue, tamborera, cumbia, bolero and bomba (all of which can be heard at a Son Venezuela show).

"People think there's only been one Latin 'explosion' and that was in 2000 with Ricky Martin and Marc Anthony," he says. "In every decade there has been a Latin explosion, whether it was Ritchie Valens with 'La Bamba,' Perez Prado, Machito, The Miami Sound Machine or Santana."

Aqui also devotes a section of the course to the "golden era" of salsa in the 1970s, when New York-based artists such as Ruben Blades, Johnny Pacheco and the Fania All-Stars revolutionized Afro-Cuban song forms.

"What we know today as salsa was born in the streets of New York City," Aqui says. "It's a Cuban music that came to New York and they shaped it."

In fact, the New York sound was the reason Aqui began listening to salsa while living in Venezuela.

"All of a sudden, it was cool to listen to salsa," Aqui says. "And it's been cool ever since."

Though Son Venezuela's Latin music IQ extends far beyond the reach of the casual listener, Aqui says the band tries to create an atmosphere where novices are welcome.

"A good chunk of our music is very accessible," he says. "Anybody who has never danced to Latin music can get on the floor and feel comfortable doing it."

One reason salsa rookies may feel comfortable at Son Venezuela shows is because the band members dance throughout the entire show.

"It's stimulating to see a Latin band dance," Aqui says. "Some bands it's just plain obnoxious -- the choreographed routines. That's not what we do. We just have a good time."

A recently married couple was suing for their money back on their wedding reception, which Son Venezuela performed at.

"The people at the bed and breakfast thought the band was too loud," Aqui recalls. "We turned down and turned down and then it got to the point that we couldn't turn down anymore, and they were still complaining.

"We ended up playing in (the groom's) front yard."

When asked which side he was rooting for, Aqui chuckles.