New York — There's a laundry list of professional and personal baggage that tag along with Angelina Jolie.

She sleeps with knives; kept husband Billy Bob Thornton's blood in a vial around her neck; has that "weird" relationship with her brother James; engages in an ongoing feud with her Academy Award-winning father Jon Voight, etc.

But one thing is often lost in this barrage of preconceptions: She's a terrific actress. Terrific enough to score an Oscar, which she did playing a rebellious mental patient in 1999's "Girl, Interrupted."

As a performer she's been described as a "loose cannon who has deadly aim." Her roles have reflected her strong-willed persona and dark beauty in big-budget projects such as "Gone in 60 Seconds," indie flicks like "Playing by Heart" and Emmy-nominated TV work with "Gia" and "George Wallace."

Jolie is back to reprise her leading role in "Lara Croft Tomb Raider: The Cradle of Life." Although the original 2001 adventure based on the popular video game was savaged by critics, it went on to earn nearly $300 million worldwide. Astonishingly, it made more at the box office than any other action film in history to star a female.

Interviewed at a July 13 press roundtable in New York, Jolie was disarmingly forthcoming about her lifestyle and career.

"I want to live a normal life and be a normal person," the 28-year-old says. "If people love me, hate me, think I'm great, think I suck -- whatever it is, I think it's healthier to not pay attention to that stuff."

Recently divorced from second husband Thornton, the actress is enjoying the joys of single motherhood since adopting a Cambodian boy she named Maddox. With child in tow, Jolie trekked around the world to film the "Tomb Raider" sequel. 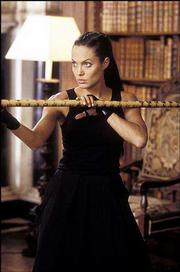 Angelina Jolie stars in the adventure "Lara Croft Tomb Raider: The Cradle of Life," a sequel to the highest grossing action film ever to star a female in the lead role.

Now Jolie is proud to echo Lara Croft's catchphrase, "This is where I start to have fun."

Q: Does it take an Academy Award-winning talent to play an action hero?

A: I think it's one of the harder things I've ever done. For most people to sit in a corner and think about what makes you sad, and what haunts you, and what makes you angry, we can all probably get to that place. But to stand front and center in front of a thousand people real proud and confident, and get them all to follow you out of the room -- do you know what I mean? (Lara) is so up for it all the time, and so positive and confident, and that actually was very difficult for me."

Q: "Tomb Raider" was the highest grossing action film of all time to feature a female lead. How does that raise expectations for a sequel?

A: There's a lot of pressure on me (laughs). I plan to not answer the phone for three weeks until it's all over. When we did the film, and when I saw it, I think it's a lot better than the first one, so I'm pretty confident that if people give it a shot it certainly holds up. But you never know -- and I don't take it so seriously. It's a summer movie, and if it goes well, great. And if it doesn't, it's not the end of the world.

Q: Were you disappointed in the first one?

A: I wasn't satisfied with it. Even through the making of it there was a lot of things -- we were all still trying to figure out how things worked. We were still trying to make the video game into a real person, but still it was THE VIDEO GAME. She was a video vixen and wasn't quite a solid woman with emotions and feelings. Even the way she looked to me wasn't sexy and real enough."

Q: On my way to New York yesterday, I saw you on half a dozen magazine covers and billboards everywhere. Do you ever get sick of seeing yourself?

A: I tend to avoid it. I saw a glimpse of two different covers -- that's the only thing I've seen so far -- I haven't read the articles, and I don't plan to. I glimpse through them quickly and send them to my mom. Yeah, it's strange. It's nice when you look at some and they look like YOU. Some don't look like you at all. But it all comes with perspective when Maddox will see something like that and he'll just say, "Momma."

Q: Does Lara Croft look like YOU in the movie?

A: Sometimes. But she's definitely HER to me. I feel separate from her.

Q: Does Maddox get what "mommy" does for a living?

Q: How has motherhood changed you personally and also what you look for in a script?

A: It changes in that I look now to see how much a script would demand of my time away from him. Also, I'll look at a part and see what the film says and see if I'd rather spend that time instead with my son. I used to just want to work and get out of the house all the time. I never was happy in my life. Now with my traveling with the U.N. (as a goodwill ambassador) and spending time with my son, it's much harder to come to work.

Q: Could you ever see yourself dropping out of the film industry for good?

A: I wouldn't because I know that as much as I believe that I could be useful in the field and just as a mother, I'm aware that I'm much more useful if I can balance both. And I do love acting.

Q: Q: When you first started out you got a lot of rejections because of your looks. Did that make you stronger or more bitter?

A: It made me confused. I was confused because I didn't know where I fit in. I went on over 100 auditions before I got a job -- and I think that's good, because you pay your dues, and then you appreciate working when you do. But I was always told that I couldn't be the girl next door; there was something odd about me. Then I started to realize I was very fortunate that I happened to be of the time there were films like "Gia" or "Tomb Raider." There are certain types of women that are a bit dark and weird that I fit. Probably if I was born in the '50s I wouldn't have been an actress.

Q: What did it mean to you to win the Oscar for "Girl, Interrupted?"

A: My mom (French actress Marcheline Bertrand) was home with me and my brother in sweatpants taking care of us when my dad won an Oscar (for the 1978 drama "Coming Home"). He was with another lady at the time. When I won that was a moment for me and my mother and brother that was kind of for us and our family. It meant a lot to me, because I loved the film, and I worked very hard and I love being an actor. But this one was kind of for my mom, because years ago she was sitting at home.

Q: There's obviously still resentment toward your father. Is there anything that would make you want to resolve whatever issues you have him?

A: No. I have an adopted son, so I don't believe that if you're genetically connected you have a natural destiny together. We are not similar people. We've tried to have a relationship. We didn't become friends in this life. It would be great to have a relationship with a dad; I don't have one. I have lot of other blessings, and I need to focus on those.