New York — Max Beckmann's allegorical masterpiece, "The Night," depicts a scene of almost indescribable brutality: a couple lynched in a crowded room by a pipe-smoking intellectual and two thugs.

The male victim's left hand is twisted grotesquely as he hangs from the rafters. The woman is in a corset and rumpled stockings, her hands bound and legs splayed in torture.

The tableaux from 1918-19 evokes a chilling, Gothic vision of martyrdom and crucifixion. A young blonde woman gestures for mercy, a red-haired woman stares away in shock and a dog howls behind the hanged man.

Many of Beckmann's greatest paintings are now on display at the Museum of Modern Art, Queens. It is his first major retrospective in New York since 1964.

The 133 oils, drawings, prints and sculptures being shown through Sept. 29 are on loan from private and museum collections in the United States and Europe. They were previously shown in London and Paris.

The imagined hell of "The Night" derives from a real-life revolt that claimed 1,200 lives in Berlin, following Germany's defeat in World War I. The oil painting reflects Beckmann's determination to confront apocalyptic themes and searing social issues. His use of provocative symbols and references to religion, mythology and history in his complicated works was deliberately unsettling, and warned of coming violence.

Beckmann's artistic consciousness was deeply affected by the horrors of war. As a German army medical orderly on the Western Front in 1915, he suffered a mental breakdown.

When the Nazis came to power in 1933, he became a target. He was stripped of his teaching posts, his works were confiscated from museums and he was forced into exile as a "degenerate" artist.

Among the towering figures of 20th-century modernism -- though not as well-known as the Parisians -- Beckmann created works of astonishing range.

"Neither a conservative nor a radical modernist, he painted the enigmas and contradictions of the 20th century in ways that resonate profoundly," curator Robert Storr said. 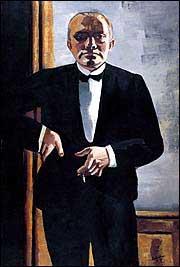 "Self-portrait in Tuxedo" (1927) by Max Beckmann is among the paintings in a retrospective exhibit of 133 works by the German artist at the Museum of Modern Art's temporary gallery in New York's Queens borough. The exhibit runs through Sept. 29.

The show illustrates Beckmann's evolving style, from his early impressionistic works in the early 1900s through the influences of expressionism and naturalism to the "new objectivity" realism he helped define in the 1920s.

He arrived at a highly individualistic style using figures and objects outlined in black and colored boldly in oils to provide a flat, two-dimensional effect. His paintings are crammed with detail. His use of jagged shapes and angular lines derive in part from cubism. Complex symbols and recurring emblems, such as horns and candlesticks, crowd the paintings. Exact meanings are largely unexplained.

"Self Portrait With Horn" (1938), painted in Amsterdam where Beckmann spent the war years with his wife, provides a benchmark for current auction prices. The painting was acquired in 2001 by Neue Gallerie in New York for $22.5 million.