Vienna, Austria — It's a question that's got Austria abuzz: Will the Terminator become the Governator?

He's been all but forgotten at home for years, but there's total recall in Austria now that native son Arnold Schwarzenegger has had his eye on the California governor's mansion.

Suddenly, the man known here simply as "Arnie" has become a national obsession. Across the tranquil alpine country, there is widespread speculation over the actor's chances as a potential Republican contender -- and bemusement at the American enthusiasm for celebrity candidates.

"Terminator a Dream Candidate," the Austrian news weekly Profil headlined over movie stills of Schwarzenegger from the summer film "Terminator 3: Rise of the Machines."

"California needs a Governator -- and who better than Arnold Schwarzenegger?" columnist Gerhard Plott wrote in a wry commentary for the newspaper Der Standard. "After all, America is by definition the land of unlimited possibilities."

Schwarzenegger is leaning against running in the Oct. 7 recall election against Democrat Gray Davis, but no final decision has been made, a senior adviser said Monday. Candidates have until Aug. 9 to get on the ballot.

"He's intelligent, and he's got strength and charisma," said Harald Mueller, a Vienna businessman who offers this political prediction: "Finally, Arnie will be governor, and that's super."

Schwarzenegger, who became a U.S. citizen in 1984, was born in 1947 in Thal, just outside the southern Austrian city of Graz.

Graz is the capital of the province of Styria -- Steiermark in German -- a corner of Austria that has become the butt of jokes for its unique accent. The Viennese long have ridiculed Styrians like Schwarzenegger for speaking "doggy German" with a throaty bow-wow inflection on certain words.

Schwarzenegger, who turns 56 today, is still known locally by his nickname back when he was competing in international bodybuilding events: the "Steirische Eiche," or "Styrian Oak."

Until recently, his popularity in Austria was mostly confined to Graz, which built Schwarzenegger Stadium, a 15,350-seat soccer venue, in honor of its most famous son. 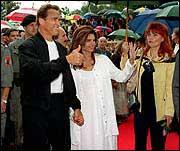 Austria-born actor Arnold Schwarzenegger and his wife, Maria Shriver, arrive for the German language premiere of his movie "Batman & Robin" in Graz, Austria, in this June 20, 1997, file photo. Schwarzenegger has become a national obsession as speculation swirled on whether he might run for governor of California. An adviser said Monday that the actor was leaning against running in the recall election of Gov. Gray Davis.

The city even planned to erect an 82-foot steel statue of Schwarzenegger in a downtown park until the actor terminated the idea last autumn, saying he was flattered but that the $5 million could be better spent on social projects or the Special Olympics.

Schwarzenegger visits regularly, albeit briefly and quietly, and in general he hasn't sparked significantly more interest or press coverage in Austria than he does anywhere else.

Until now. Newspapers, magazines and television shows are rife with reports on Schwarzenegger and his political ambitions, spiced by irreverent commentary on the American penchant for electing entertainers.

In recent weeks, Schwarzenegger has been compared to former President Reagan, actor Clint Eastwood, professional wrestler Jesse Ventura and other celebrities who have won elected office in the United States.