'Gigli' is a career disgrace for all those involved

Hollywood's most overexposed couple are now responsible for making the most underdeveloped movie in recent memory. 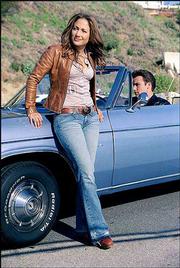 Jennifer Lopez, left, and Ben Affleck play low-level hoods who are forced to work together in the comedic-drama "Gigli."

If the idea of Ben Affleck and Jennifer Lopez playing hired hoodlums isn't already enough to elicit an aneurysm, how about making their kidnapping victim a mentally challenged teen (Justin Bartha). Then throw in the fact that Affleck's title character is a mook who believes he's the "original gangster's gangster" and Lopez a Chinese philosophy-spewing lesbian.

How bad is the acting?

Bartha's performance may be the most cliche attempt at conveying a disability ever put on screen. The rookie actor -- whose previous film experience consists of being a production assistant on "Analyze This" -- behaves like a theater major who watched "Rain Man" over and over while smoking pot in his dorm room.
And did I mention that he raps? An adorable rendition of "Baby Got Back," no less.

Affleck is persuasive when he plays an uptight yuppie (as in the outstanding "Changing Lanes"). Yet in "Gigli" he struggles mightily trying to make this sexist, dumb, profane lummox watchable. The Sha Na Na haircut doesn't help matters.

That said, he's still better than Lopez. Clad in lo-rise jeans and midriff-baring blouses like most assassins, the woman succeeds in spending an entire movie talking about herself and never giving the audience any clue what she is about. It's simply impossible to get a handle on her character, and trying to "sex-it-up" through potty talk only makes her more baffling.

(A scene where the fleshy diva does yoga while blathering about her genitalia would be right at home in "The Vagina Monologues," but it has absolutely no place in a "romantic comedy.")

How bad is the production?

Writer/director Martin Brest ("Meet Joe Black") comes across like a filmmaker too afraid to yell "cut." He's so in love with his own words -- or so intimidated at leaving any of the blockbuster celebrities' work on the cutting-room floor -- that the movie backslides into a competing series of monologues ... five-minute monologues that feel longer than a senatorial filibuster.

This results in impossibly ill-conceived scenes such as a walk-on by Christopher Walken as a nosy detective who pesters Affleck. There are moments where seconds pass by without a word, movement or shift of facial expression during this endless exchange.

This is the first time I've ever attended a screening where the audience was screaming the word "edit!"

The only thing Brest seems to be good for is recruiting his old "Scent of a Woman" collaborator Al Pacino for a role as an irate mob boss. The Oscar-winner gives the movie its only tangible sense of energy (courtesy of a long monologue, of course), and insures that those who were already asleep will at least wake up for a spell.
How bad is the dialogue?

The funny finale to the "American Pie" series takes the Michigan gang out of school and puts them into the real world. Disastrous humiliations ensue. Jason Biggs and Eugene Levy are reliable as always. But the real surprise is Seann William Scott, whose manic interpretation of the obnoxious "Stifler" elevates even the cheapest gags to humorous heights.

Usually, being exposed to profanity has little affect on me, but it's so instantly invasive in "Gigli" that I started to count the amount of F-words. I gave up when nearing 25 before the opening credits were finished.
Brest must think he's fucking Quentin Tarantino or something.

In addition to the obscenities, viewers are treated to other lovely turns of phrase. In one scene, Affleck uses his bada-Bing Crosby charm to serenade Lopez about how "every relationship has a bull and a cow," at which point he actually moos in her ear. This is rivaled by her ensuing sermon on oral sex that culminates with requesting that he "Gobble, gobble."

Don't worry folks, there will be even more talk of turkeys and cows when the other reviews of the film start rolling in.

If nothing else, "Gigli" should prove that no amount of pop culture exposure can get audiences into theaters when a movie is this barbarously boring. Not even the combined publicity of all those celebrity gossip shows, magazine covers, talk show appearances, album sales, clothing lines, etc., will bail "Beniffer" out of this abomination.