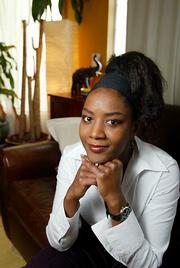 Author ZZ Packer poses at her home in Pacifica, Calif. Packer, 30, has been published in every major literary journal and received prestigious awards and rave reviews for her first collection of short stories, "Drinking Coffee Elsewhere."

Finally, she scoops up the dog, deposits it in a spare room and slams the door.

Packer, 30, has been published in every major literary journal. She has received prestigious awards and rave reviews for her first collection of short stories, "Drinking Coffee Elsewhere." But despite the accolades, she knows she's only as good as her last story.

"I don't count on things," she says. "Just because things are going well for the moment doesn't mean they're going to go well for a while."

Right now, things couldn't be better for Packer and her work.

Kirkus Review said her collection "cuts to the bone of human experience and packs a lasting wallop."

The New York Times Book Review said it "reminds us that no stylistic tour de force -- or authorial gamesmanship, or flights of language -- can ground a story like a well-realized character."

Packer was born in Chicago and moved to Atlanta when she was 5. Her full name is Zuwena, but she says she's always been called ZZ.

"Growing up in the '80s and '90s and ... being a black woman and growing up in the Pentecostal church -- why does that need to be told?" she asks. "I have a different outlook from most people."

Packer's perspective has caught the attention of the literary world.

Her eight short stories were published separately, some as early as 2000. But it was the selection of the title story for the New Yorker's debut fiction issue that summer that touched off a bidding war for rights to the collection. Riverhead Books won, releasing "Drinking Coffee Elsewhere" in March.

"She's an old-fashioned writer," says Cindy Spiegel, Packer's editor at Riverhead. "She's interested in metaphors and imagery and characters. It feels refreshing, but it also feels different from most young writers today. ... There's no attempt at being trendy."

Spiegel says she's seen a resulting sales spike. "It wasn't the hugely dramatic thing we hoped for," Spiegel says. "But she had John Updike saying wonderful things about her writing."

Not bad for someone who didn't seriously consider becoming a writer until midway through Yale University, where she focused on math and science.

"I knew I'd be good at medical school," she says. "But I'm so flaky, I didn't know that I'd be a good doctor. I became an English major, but I had no idea what I was going to do with it. I just knew that I loved it."

Packer had always tinkered with writing -- reading voraciously as a youngster and authoring short stories in high school.

The self-described "program hopper" attended the prestigious Iowa Writers Program in 1997 and went on to receive a Stegner Fellowship at Stanford University in 1999. She recently finished a stint as Jones lecturer at Stanford, and she's taking the summer off to work on her first novel. Next semester, she'll return to Iowa to teach.

"After that, I'll have to get a job," she says, laughing.

Unless, of course, her novel about the "buffalo soldiers," blacks who served in the U.S. Army following the Civil War, proves as successful as her short stories. Packer says she's about 450 pages into it.

Spiegel says she'd give Packer an advance tomorrow if she wanted it. But Packer isn't ready to show her manuscript to Spiegel.

While Packer was guarded about the story line, she doesn't hesitate to show off what she calls her office -- a space in the corner of the bedroom she and her husband share.

Books about the Civil War and buffalo soldiers spill off a tall, cluttered set of shelves, and stacks of notes and clippings and color-coded index cards are piled everywhere. The space is tiny -- long and narrow with the bookshelves, a desk and room for not much else.

Packer, who chain-smokes as she talks, is wearing stretchy black pants, a black zip-up sweater and flip-flops. Her long hair is held back with a wide cloth band. She says she's comfortable in the confined space. It reminds her of her first apartment in San Francisco. "I know where everything is," she says. "It's more organized than it looks."

The novel is set in 1866 and the main characters include two black soldiers, a white colonel and a woman who disguises herself as a man so she can fight. Packer writes nearly every day and sets herself page number goals instead of time requirements.

"You have to nurture your talent or it's going to lie fallow," she says. She doesn't write every day, but on those days when she doesn't, the guilt of not doing so gets her to write the next day.

The Iowa workshop taught her valuable discipline, she says.

Frank Conroy ran a no-frills boot camp for writing, she says. His mantra was "meaning, sense and clarity."

"You question every word you put on the page," she says. "You can't have these writerly ideas that it just sounds good."

Pulitzer Prize winning short-story author James McPherson taught her to realize she has an obligation as a writer to contribute something to the world.

But most important of all, Packer says, she learned to make every story the best it can possibly be.