When Lawrence native Tanya Shaffer cozies up with a book, she wants to meet compelling characters, feel like she's IN the place where the story occurs and get swept up in the drama of the tale.

That's true whether she's nosing into a work of fiction or nonfiction. 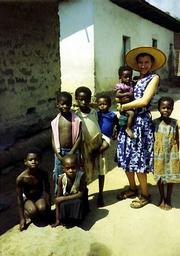 Lawrence native Tanya Shaffer pals around with children in Afranguah, Ghana, during her trip to the West African country in the early 1990s. Shaffer, who lives in Berkeley, Calif., will sign copies of her book about the trip, "Somebody's Heart is Burning: A Woman Wanderer in Africa," on Tuesday at the Lawrence Jewish Community Center, 917 Highland Drive.

So that's the route she took with her first book, "Somebody's Heart is Burning: A Woman Wanderer in Africa" -- a travel story that took her own life on a route to West Africa a decade ago.

Shaffer, a stage actress and writer who lives in Berkeley, Calif., was 26 and fleeing a relationship on the verge of getting too serious. She signed on with a volunteer organization and journeyed to Ghana, where she spent a year helping build schools and hospitals in remote villages.

Her novel chronicled those months in vivid detail, providing glimpses of West African geography, food, cultural customs and, most of all, people.

"Every writer has her own spin, her own special thing she brings to the table," Shaffer said during a recent telephone interview from her Berkeley home. "My focus is on the characters and the personal relationships and the drama of the story.

"In a great travel book, for me, you get the information without ever feeling like you're reading a lot of description. As with good fiction, you learn through being caught up in the story and the characters and the sense of the place. I wanted my book to read that way, too. ... The fact that it really happened was no excuse not to frame it in such a way that it would read like a good story."

Shaffer traveled to Africa solo. She's had a penchant for being a lone wanderer since her first solo trip happened quite by accident. She was in college, and she and a friend were planning a summer volunteer trip to Czechoslovakia. Her friend, worried about finances, bailed at the last minute.

"I decided to go ahead and go alone because, at that point, that was my summer plan," Shaffer said. "That's when I discovered it's really great to travel alone.

"What's great about it is that you meet so many people. You're so open, and also you don't have to consult with anyone if you want to change your plan at the last minute. You're just so free."

That sense of emancipation allowed Shaffer not only to alter her itinerary on a whim, but it also freed up time for writing. She kept meticulously detailed journals, describing interactions, tastes, sounds and even vegetation.

"I wrote in it a lot. It was like my travel companion," Shaffer said of her journal. "When you travel alone, there's just so much stimulus. I would write for an hour or two a day, just sit down wherever I was. I just always carried a notebook in my daypack, and I had to ship a lot of notebooks home, as you might imagine."

The tantalizing result for readers were passages like this one, in which Shaffer recalled the streets of the Ghanaian capital, Accra:

"The African fabrics would make a flamingo look drab. The prohibitions against combining reds and pinks or circles and stripes were absent here. Fabrics of every description lived side by side in delirious dissonance, a dizzying visual feast. The hairstyles too were astonishing. Some adorned the women's heads like helmets, with sharp spikes sticking out in every direction. Others were elaborate multi-tiered sculptures, their interlacing layers balanced against each other like houses of cards."

Through her accounts of interactions with Ghanaian children and adults, Shaffer teaches readers about the culture there. Around every corner, she encountered someone eager to help her find a cheap taxi, a place to stay, a friend she was trying to locate. Of course, their eagerness often came at a cost. They usually wanted a little something in return: Shaffer's sunglasses, a few cedis (Ghanaian currency), a trip to America or, on a few occasions, marriage.

Shaffer learned a lot about generosity ("It's been my experience, not just in Africa, but also in Central America and other parts of the world, that the poorest people are often the most generous. You can really learn the lesson about not clinging to things.") and living in the moment ("In Africa, the bus will leave when it's full. That could take an hour or, in the worst case scenario, it could take a couple of days. If you're spending that time sort of anxiously leaning forward into the future, you're going to have a miserable experience. So you have to just learn to relax your control a little bit.") She also came away with a sense of the complexity of conditions in Africa.

"The problems there have to do with so many different factors, and there's sort of a whole global economic order that's coming into play. What would be the action to do to try to address that is very confusing. So in political terms I think I came back with more questions than answers. In human terms, I did come back, though, very opened up."

Shaffer's travels have taken her far afield. The 36-year-old grew up in Lawrence. She attended Broken Arrow School, South Junior High and Lawrence High School. She performed in a few Kansas University theater productions when she was still in high school.

She has toured to more than 40 cities with her solo show "Miss America's Daughters" and her play "Brigadista." Her most recent solo show, "Let My Enemy Live Long!" was based on her trip up West Africa's Niger River to Timbuktu, a journey she recounted in one chapter of her book. 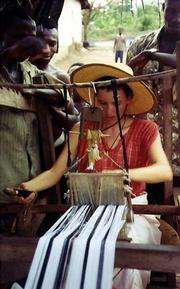 Lawrence native Tanya Shaffer learns to weave in Kumasi, Ghana. She visited the West African country about a decade ago and recently published a book about her travels, "Somebody's Heart is Burning: A Woman Wanderer in Africa." Shaffer, who lives in Berkeley, Calif., will sign copies of the book Tuesday at the Lawrence Jewish Community Center, 917 Highland Drive.

Her travel stories have appeared on Salon.com and in the anthologies "Salon.com Wanderlust," "A Woman's Passion for Travel," "The Collected Traveler: Morocco," "Chicken Soup for the Traveler's Soul" and "Africa-par-Adventure."

"I still have a lot of friends there," she said.

She'll be back Tuesday for a booksigning at the Lawrence Jewish Community Center, 917 Highland Drive. After her book tour, she'll take a little time off to have a baby (she's due in August).

After that, a year in Central America was a possibility, or maybe a trip to India, where Shaffer's partner, David Green, develops health care programs. She says we can expect more writing, whether it's plays, short stories or another book.

Either way, it should be an educational experience -- for everyone involved.

"We are accustomed to a type of travel writing where you learn a lot about the narrator, and I think that's fine, but if you only learn about the narrator, then it hasn't done its job as a travel story," Shaffer said. "You want to really come away with a deeper sense of the culture, of the place that person is visiting, a deeper sense of empathy for the people, hopefully a broadened world view, as though you had visited this culture yourself and learned something about how people live in the rest of the world."