Lawrence Community Theatre's latest production goes from pinstripes to tights, operatic arias to big band jazz at the drop of a Shakespearean floppy hat -- or a vintage 1940s fedora.

And therein lies the biggest challenge of staging Cole Porter's "Kiss Me Kate," says Curtis Marsh, the male lead in the Lawrence theater's production of the musical, which opens Friday. 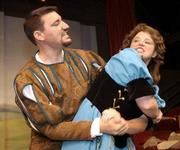 Petrucchio, portrayed by Curtis Marsh, struggles with Kate, played by Sarah Young, in a scene from "Kiss Me Kate." The Cole Porter musical opens Friday and runs through June 22 at the Lawrence Community Theatre, 1501 N.H.

"Personally, I've been significantly challenged with doing scenes right next to each other that are in Shakespeare and then back to 1940s Broadway," he says of his role as Fred/Petrucchio. "But what's nice about my role is that I play this kind of over-the-top theatrical guy in the 40s, and then my part in Shakespeare is kind of an over-the-top theatrical egotist. My biggest transition is really just the speech, the way that I have to deliver the lines."

At this point, the uninitiated might be confused. To clear things up, Porter concocted "Kiss Me Kate" as a play within a play. As a cast of 1940s Baltimore actors stage a production of Shakespeare's "The Taming of the Shrew," the audience witnesses both the on-stage 16th-century drama and the steamy offstage interactions between the Truman era thespians.

Fred (Marsh) and Lilli (Sarah Young), recently divorced, are reunited when they both land roles in the Shakespeare production, and their tempestuous relationship often boils onto the stage. That translates to a lot of sexual angst in the show, says director Mary Doveton.

Throw a couple of gangsters into the mix (Alfred Lata and Pete Peterson), who've come to reclaim the $10,000 debt of irresponsible gambler Bill Calhoun (Daniel Lassley), and the show sounds far from innocent. But it's actually a comedy.

"It was written in a time when musical comedy was really musical comedy and didn't have the serious overtones we associate with musicals today," Doveton says. "She (Lilli) calls him a bastard. That's about as low as it gets."

The real attraction for Doveton is the show's "beautiful," though "difficult," music.

"The music is just glorious," she says, noting such favorites as "Wunderbar" and "So in Love." On the other hand, "It's a very, very difficult show, musically. We're just extraordinarily lucky to have such talented singers. I'd say that the musical requirements almost verge into the operatic."

So it's a good thing both Marsh and Young are classically trained vocalists. Both studied voice at KU; Young also trained at Indiana University.

"It is a challenging role," Young says of her two characters, Lilli and Kate. "Things that I have done similar to this have been operatic roles. It has been challenging but a lot of fun."

Another challenge -- and this is true of all the musicals Lawrence Community Theatre stages at its black box theater in an old church at 15th and New Hampshire -- is space. But Doveton credits set designer Jack Riegle and his volunteer crew with dreaming up inventive engineering to address the problems.

They've been busy for about a month, painting three different panel scenes that fold in and out of action, at least four intricate flats that can be rolled on stage and then folded out to as big as 12 feet by 12 feet and dozens of devices -- from bungee cords to screen door hooks -- to secure all the components.

"There's probably as much choreography going on with the scene changes as with the dances," Doveton says while assessing progress on the set.

When the lights dim between scenes, all but a few people in the cast of 25 will double as stage hands, assisting a crew of seven.

Best of both worlds

"Kiss Me Kate" is the only Porter musical to exceed a thousand performances on Broadway. It enjoyed a successful revival there in 1999. Doveton can't remember the last time a troupe performed it in this area.

"We're finding that a lot of people haven't seen the show," she says.

So they shouldn't miss this production, Marsh says.

"It is a very complex show, as you can imagine, having to not only take a cast from Shakespeare to Broadway but also scenes and music and everything combined," he says. "It's what attracted me to the show, and I like to think it's what will attract audiences to the show.

"If you like Shakespeare, but you think you might not want two full hours of it, and if you like Broadway musicals, but you don't know if you want two straight hours of it, we'll give you a little of both."