Los Angeles — You don't have to exist to get an MTV Movie Award.

The irreverent ceremony honored the little green Jedi, Yoda, for best fight scene from "Star Wars: Episode II--Attack of the Clones." The award for best on-screen team went to the raspy creep Gollum from "The Lord of the Rings: The Two Towers" as well as human co-stars Elijah Wood and Sean Astin. 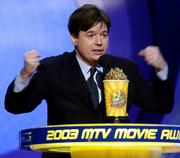 Yoda appeared on a giant screen to accept his honor and spoke in his signature circuitous manner.

"Hmmm ... grateful am I to this award receive. To win, I did not expect," he said. "Promise myself cry I would not."

The computer-animated Yoda became angry when music started to play him off the stage.

Rage rapper Eminem claimed the breakthrough male trophy for his work in the drama "8 Mile."

In a pre-taped acceptance speech he took a shot at Mariah Carey and her romantic-musical flop. "I can't believe I beat Mariah for 'Glitter,"' he said.

The event at the Shrine Auditorium is more satire than ceremony, honoring show-business types for such categories as best kiss, villain and fight.

While Yoda and Gollum won in categories in which they competed against human actors, they were both also nominated in a new MTV class for "virtual performance." Their competition included the jabbering marsupial from "Kangaroo Jack"; Dobby the self-torturing elf in "Harry Potter and the Chamber of Secrets" and the talking dog from "Scooby-Doo." 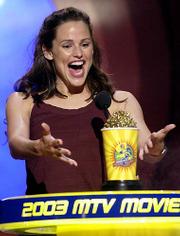 MTV says the award goes to the character -- not necessarily the flesh-and-blood actor involved or special-effects team that create it.

Singer Justin Timberlake and Seann William Scott (Stifler from the "American Pie" movies) were the hosts. Timberlake and Scott appeared in one of the ceremony's traditional movie spoofs, parodying "The Matrix Reloaded." In the short, Timberlake used his 'NSync dance moves to pummel a growling computerized "agent" played by Scott.

The 12th annual ceremony is scheduled to air Thursday on MTV.