In a nation with a 24-hour-a-day TV channel devoted to nothing but food, hundreds, if not thousands, of Web sites for foodies, and a fusion restaurant in every little town, Calvin Trillin is a breath of fresh air -- someone who knows that food is all-important and yet can't be taken too seriously.

"Feeding a Yen," the latest book by the longtime writer for The New Yorker magazine, takes the reader on a gently humorous tour of some of his favorite feeding spots. It's a book that reads the way some might describe a Chinese meal -- delicious, but soon after you put it down you want more. 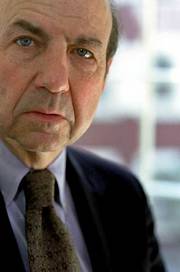 Trillin opens with a grand search of New York for the magic bagel, a small, unattractive pumpernickel item that once was his daughter's favorite and which he hopes will induce her to move home from the West Coast.

It's a futile search, he seems to know, yet one worth pursuing, and he finally locates the widow of the man who made the grand bagel.

She, Trillin explains, "did not seem terribly engaged by my quest." Indeed, he writes, the longest answer he got from her was when he asked if the bakery had stopped making that bagel when her husband died. Her response: "No, before."

More engaging, he found, are the residents of Louisiana, where he explored the delights of boudin sausage and boiled crawfish, gumbo and turducken.

In Evangeline Parish, Trillin reports, it is the custom for American Legion members to ride horses from farm to farm, requesting the donation of a chicken for their gumbo.

Among trips to South America for peppers and New Mexico for chile (spelled with an "e") he also reflects on one of his favorite topics: the barbecue of Kansas City.

This is a subject Trillin has often expounded upon and on which he's capable of becoming nearly poetic.

But far from encouraging the spread of this food, as one would expect, he writes that this barbecue falls into the category of something that can be appreciated only if eaten in its place of origin.

"People who travel thousands of miles to avail themselves of the healing waters found in a single miraculous spring have good reason for not trying to make do with a bottled version in a more convenient location," he concluded.

Perhaps he's right about the food, but the writing travels just fine.