Queen marks 50th anniversary of coronation with a little fun

London — Fifty years after her glittering coronation brought a dose of badly needed glamour to a nation still recovering from war, Queen Elizabeth II marked the event's anniversary Monday with a somber service followed by a dash of contemporary informality.

Hundreds of onlookers cheered and waved as the queen's limousine pulled up to Westminster Abbey, where she was crowned in 1953. Inside, more than 2,000 people, including representatives of most major faiths, gave thanks for Elizabeth's reign. 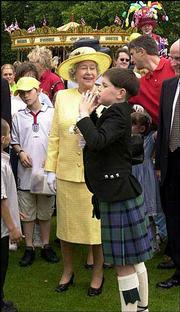 Britain's Queen Elizabeth II visits with some young guests invited to a party for disadvantaged children in the grounds of Buckingham Palace. Monday's celebration was to commemorate the 50th anniversary of her coronation as queen.

Later, about 500 children flocked to Buckingham Palace for a more casual celebration -- games, clowns, a carousel and a circus tent in the garden for the youngsters, many of them poor, orphaned or disabled. Some were invited because their parents served in the Iraq war.

Two hundred of the children arrived in a convoy of taxis that cruised down the wide Mall, festooned with flags and balloons.

"It's really very nice to see you all here," Elizabeth told the group.

The children got autographs from popular musicians and radio disc jockeys, munched cotton candy and watched clowns and other acts inside the circus tent.

"My friends are really jealous," crowed Alexandra Walker, 10, of Essex northeast of London. "I like the rides best."

The Westminster Abbey service was modest compared to the coronation itself, when huge crowds gathered to watch the bejeweled, 27-year-old Elizabeth arrive in her ornate Gold State Coach. The celebrations were also far more low-key than last year's Golden Jubilee festivities marking the 50th anniversary of Elizabeth's accession to the throne, which came more than a year before her coronation ceremony.

This time, the abbey's bells chimed and a fanfare of trumpets played to herald the silver-haired monarch's arrival with her husband, Prince Philip.

"On this significant anniversary, with quiet but deep respect and affection, we stand with our sovereign and each and all of us commit ourselves anew to that duty and service which are both hers and ours," said the Very Rev. Wesley Carr, dean of Westminster.

Sixteen senior members of the royal family attended, although grandson Prince Harry -- third in line to the throne -- was unable to take part because of school exams.

Also in the audience was Prince Charles' companion Camilla Parker Bowles, although she did not arrive with Charles or sit with the royal family. Her presence seemed a further sign of the queen's gradual acceptance of the couple's relationship.

More than 200 people who took part in the original coronation ceremony attended the anniversary, along with 34 "coronation babies" born on June 2, 1953. About 1,000 members of the public won tickets in a lottery.

Prime Minister Tony Blair, who is away at the G-8 summit in France, sent the Lord Chancellor Lord Irvine as his representative. Former Prime Minister Margaret Thatcher also attended.

Sir Edmund Hillary, who with Tenzing Norgay was the first to climb Mount Everest, was in the crowd, too. His feat has long been linked in Britons' minds to the coronation, since news of the New Zealander's ascent reached London on the day of the crowning.