Crack open the July issue of Spin magazine and you'll find a curious picture on the inside: a collection of 34 young adults from Omaha assembled in a family-reunion-esque portrait. The picture looks like an outtake from some long-forgotten summer camp, only the campers have a particular affection for ratted black hair and thrift-store sweaters.

The picture in question accompanies a story on Omaha's Saddle-Creek Records, the little-label-that-could (and now does) litter the pages of Spin, Rolling Stone, The New York Times and countless other trend-setting publications. Generally regarded as a model for small-label success, Saddle-Creek has helped turn well-kept indie secrets like Bright Eyes and Cursive into nationally known acts that sell tens of thousands of records and pack high-profile venues like the Bowery Ballroom in New York City.

Though Lawrence has never spawned a hometown label with the widespread success and visibility of Saddle-Creek, it's not for the lack of trying. Since the early '80s, a plethora of labels -- Fresh Sounds, Mercy, Lotuspool, Barber's Itch, Manic and Noisome, to name a few -- have served as breeding grounds for some of the freshest local and regional talent on the scene.

But even for the people who recall them most fondly, these labels are a relic of the past; a fond reminder of a time and place when Lawrence seemed like it might just live up to its billing as the "next Seattle." Sure, they might collect a random royalty check now and again, but none of the aforementioned labels (with the exception of Noisome) are still actively involved in releasing music. 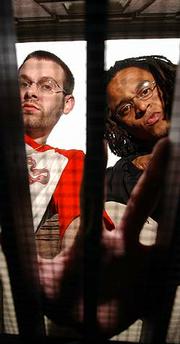 In their place, a new generation of glory seekers -- Archer Avenue and Datura -- are seeking to put Lawrence on the map. Though these labels' bank accounts would barely cover the cost of printing a thousand CDs, both believe that with enough patience and hard work, they can achieve goals of quitting their day jobs and supporting themselves through the label.

Hopefully, they won't look to Nick Gordon for advice.

"You have to be a little crazy to start a label right now," said Gordon, who steered Mercy Records through the mid-'90s and released the "Soundtrack for Moments" local compilation on his own Braintree Foundation label before bolting Lawrence for a job that "actually turns a profit" with Caroline Distribution in New York.

"It's a hard time for the music industry, which is sad because there's so much good music to put out."

A tree house on Archer Ave.
The headquarters of Archer Avenue is in fact on Indiana Street, in a little brown house tucked away by some overgrown shrubbery. The structure has a progressive design to it, as if it were an architecture student's senior thesis project. With its sharply sloping ceilings and maze-like passageways, the whole house seems to imply movement; a fitting complement to the buzz of activity occurring within its walls.

On this summer day, though, the house is quiet. Getaway Driver's amps, guitars and drums are scattered across the living room floor, the aftermath of new demos the group has been recording. The four band members -- Stephen Wolfe, Nate Harold, David Newton and Thomas Brantman -- represent the brain trust of Archer Ave., a network of musicians that has expanded to include local act Kelpie and two bands from Texas: Little Compass and Tiebreaker. 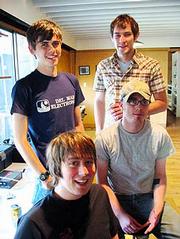 The boys are excited about Archer Ave.'s second release, an eight-song sampler of its bands. The label's first release -- Getaway Driver's "Cliches with Harmonies" EP -- came out in February.

"We wanted to show people that we're not just talk," Brantman said.

As a demonstration of commitment to getting its name out, Archer Ave. plans to make the sampler available for free or "very, very cheap" in local record stores. It hopes to do the same in outlets across the country in towns that the band passes through on tour.

"We're hoping to use it as bait to get distribution," Wolfe said. "At this point, that's the biggest obstacle."

Archer Ave. will benefit from the contacts it already has established with local graphic designers and music fans. All of the label's artwork is designed by Humble Empire, a local "design studio without a front door" composed of KU design graduates. Archer Ave. and Humble Empire are also heavily involved in Kallide, a collaborative music and film project that gave its first performance in April at The Granada.

"It's kind of nice to have a group of 20 kids that are in our corner and we're in theirs," Wolfe said.

Humble Empire's Peter Heffner added: "It's kind of like a tree house; a club."

Lippincott and Approach in Datura's neighborhood.

From multi-performer shows to collaborative recording projects, local hip-hop artists check their egos at the door in the spirit of teamwork.

Though it's not the only hip-hop label in Lawrence, Datura Records probably has hit the ground running faster than any of its peers. The label has sold more than 500 copies of Approach's "Ultraproteus: The Funk Reaction" EP and plans to release full-length albums from Kansas City's Deep Thingkers and Mac Lethal this fall.

"It's not an eight-hour day yet, but I think it's on the horizon," said co-owner and Kansas City native Brent Lippincott.

Lippincott, who earned a music business degree from Middle Tennessee State University, was inspired to start Datura after attending the 2001 Winter Music Conference in Miami.

"I basically ran into a bunch of busters who had no idea what they were doing and were incredibly egotistical," Lippincott recalled.

"The whole drive back up to Tennessee I was like, 'You know, I could do this better than all these people.'"

So, with little money but lots of determination, Lippincott started Datura while still attending college. He released a compilation CD titled "Datcomp 1" in January 2002, featuring a variety of East Coast talent. Ultimately, however, it was an old friend from Kansas City -- Sean Hunt aka Approach -- who led him back to the Midwest to pursue his dream.

"I knew he had a record that he'd been working on forever, and I wanted to be the entity to put it out," Lippincott said. "It was almost like I had a dream and woke up the next day and called Sean and said, 'Hey, why don't we do this?' And we did."

Lippincott and Hunt agreed to be co-owners of Datura and moved to Lawrence last summer to be close to what they felt was a burgeoning hip-hop scene. The move paid off. In less than a year, Approach has grown from a relatively unknown MC to a leader in the local hip-hop scene who packs local clubs with the backing of his live band. He'll embark on a tour of the East Coast with Deep Thingkers in July and August.

"I'm in the first month of being a musician, and I'm still eating," Hunt joked. "If you start to see me and it's just a bunch of dreads, then there's a problem."

Approach may soon be able to reach a much larger audience with the help of Coup d'Etat Records (J-Live, MC Paul Barman), a NYC-based hip-hop label that will re-release "Ultraproteus" this fall.

Datura still will be involved with Approach's development and will have its logo on all of Approach's Coup d'Etat releases ("Free advertising", Lippincott boasts).

Though he now has the opportunity to succeed solely as a musician, Hunt said he is still committed to using Datura to develop the careers of other artists.

"I'm hoping in a couple of years all I have to do is work Datura stuff," Hunt said. "It's beginning to happen. If we continue to put positive vibes out in the air, it will come back."

"All you need is an idea," Lippincott said. "If you want to do it, do it. Don't just sit around and be like, 'Well, I wish I was on a record label,' when you could just start one yourself."

Mercy, mercy
If ideas are the currency of record labels, then Lawrence's Mercy Records was surely rich. The Byers brothers (Doug and Brian) steered the label though a successful run in the mid-'90s that gave birth to three "Loaded in Lawrence" compilations and records by The Love Squad (of which Doug Byers was a member), Salty Iguanas, Billy Goat, Slackjaw and more. They had help from Nick Gordon -- who came aboard as an intern but demonstrated such vision that they hired him to run the day-to-day operations of the label -- and a seemingly endless supply of interns.

"It's amazing the number of people who work for free if you tell them you're in the music industry," Doug Byers said.

The Byers employed a grassroots strategy to get their music into other cities.

"If we were playing in Eau Claire, Wisc., we'd find out where the record store was and put a few CDs in," Byers said.

Mercy managed to do the impossible -- support three full-time staff and two part-time -- because it had a profitable ace up its sleeve: a fully equipped recording studio that the Byers leased to up-and-coming bands.

"The studio was profitable, probably more so than the label," Byers said. "We were able to support five people in a very interesting field for a very short period of time."

But even the studio couldn't put food on the table when families and domestic lives came calling. The label's last release came in 1997, and then Brian sold the studio a few years later.

The Saddle Creek family. Label owner Robb Nansel is the guy standing between the ladders.

"In 1997 it was time to take a risk (and sign more bands) or not, and we chose not to," Byers said. "I probably would not be able to have a family and own a house if I was still running a recording studio."

Omaha wasn't built in a day
If there's any lesson to be learned from Saddle-Creek, it's that patience pays off.

"It took many years of constant touring and recording before anybody began to take notice," said label owner Robb Nansel. "It probably took five years before we turned a profit."

But, as Nick Gordon can attest, patience coupled with a briefcase full of cash pays off quicker.

"If by 'successful' you mean profitable, and if by 'profitable' you mean being able to support at least one person and put out full-length records that you can afford to work and nurture, it means having a bunch of money, a lot of energy and two good ears," he said.

It's a sentiment that's not lost on Archer Ave.'s Wolfe.

"We all went into this knowing that it's going to take a lot of time, a lot of work and a lot of money," Wolfe said. "If it ever came to a point where we could do this for a job, I'd gladly put in 60 hours a week."