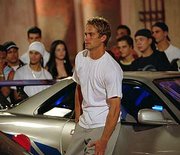 From the first image of the Universal Pictures logo morphing into metallic hubcaps and zooming away, it's clear this sequel is making a game attempt at having a little fun.

"2 Fast 2 Furious," the inevitable follow-up to the $144 million-grossing street racing ditty from two summers ago, provides the same brainless thrill ride as its predecessor. It's as much of a guilty pleasure as the loud, adrenaline-fueled original -- maybe more so because it yields even lower expectations.

While "star" Paul Walker reprises his role, the real STAR -- Vin Diesel -- is conspicuously absent. On paper this looks like an insurmountable obstacle, but "2 Fast 2 Furious" manages to maneuver around it thanks to some key decisions.

First, the story is sensibly self-contained. Almost no previous knowledge of the initial movie is needed to enjoy this one.

There's no Vin Diesel in the tank of this sequel to the popular street racing flick, however it's just as much of a guilty pleasure as the adrenaline-fueled original. Director John Singleton ("Boyz N the Hood") masters kinetic scenes of speed while always self-aware of the material's own junky aspirations.

Third, the sequel has Tyrese. The ex-supermodel brings real charisma to his co-leading role. Despite a shaky start, in which it appears his character is just going to be the "angry black man," Tyrese loosens up and turns into an excellent font of comic relief. In only his second film (he also starred in Singleton's "Baby Boy"), the performer has already learned to deftly deliver a punchline.

Sure, the movie is unnecessary and silly. But, honestly, it's arguably smarter than "The Fast and Furious" -- a film whose entire story thread rested on the most implausible method of hijacking ever devised by crooks.
Although there are plenty of scenes involving street races and car chases, the new picture is really just a variation of "undercover cops take on a drug ring." Even with such a typical plot line, the flick has enough twists and gimmicks to keep the audience interested.

In "2 Fast 2 Furious," Walker returns as Brian O'Conner, a renegade ex-police officer who's found refuge in South Florida. After taking part in one illicit race too many, Brian is arrested. However, he is recruited by U.S. Customs agents to help take down a nasty drug kingpin named Verone (played by Cole Hauser, who was coincidentally Vin Diesel's adversary in "Pitch Black").

Verone is looking for drivers to help with a high-stakes smuggling gig. So Brian and his antagonistic childhood friend Roman (Tyrese) -- an ex-con who will be granted full clemency if he helps out -- work their way into the gangster's organization.

Soon, they're running afoul of both Verone's henchman AND the feds, who have serious doubts about their intentions. Plus, they become dangerously close to compromising the identity of an undercover agent (Eva Mendes), who is posing as Verone's girlfriend.

It's still hard to believe Paul "Mr. Vanilla" Walker can effectively headline an action movie. The pretty boy has about as much street credibility as "Weird Al" Yankovic. In any other cinematic universe this might pose a problem, but it doesn't seem to matter in a project where some of the cars can claim more personality than certain cast members.

The "Furious" series proves it doesn't need Walker or Diesel or anyone else for that matter. The formula is viable as long as it has a strong director and combines enough kinetic scenes of speed with the self-aware recognition of its own junky aspirations.

Sometimes summer movies don't have to offer anything beyond an hour and a half of mindless thrills. "2 Fast 2 Furious" totally delivers on that level.

It's the mindless movies with NO thrills that one has to watch out for.