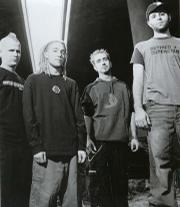 In the testosterone-driven metal genre, guitars take the focal point more often than not. When it comes to rock, the bass is more known for conjuring a phantom rhythm.

Tallahassee, Flor., band Presence, appearing this Saturday on Rockfest's second stage at Verizon Wireless Amphitheater, the art of writing music starts off with more of a hip-hop approach.

Guitar licks take the backseat and the groove jumps in front.

Presence's debut on Curb Records, "Rise," testifies to the band's allegiance to the bass line.

"Originally, being a bass player it was just selfishly me," bassist D.J. Stange, one of Presence's founding members. "It still begins with that rhythm, but we all write the songs together. Any one of us can start out with an idea for a song."

Presence blends rap and rock not into a gangsta rant, but rather for cathartic introspection.

Three of the band member loss loved ones within a week's time and dealt with the grief through songs like "One Final Breath."

"We've been through a lot," Stange said. "We were fortunate enough to have much as an outlet during that time."

Elegies are a common theme for the band that began its earliest lineup in 1996. Sometime the memorialized individual isn't even a family member.

Saturday Night Live star Chris Farley's death affected the band enough that it wrote "Van Down by the River," referring to one of the many skits the comedian performed.

With all of the songs dedicated to healing, vocalist Jay Slim, drummer Nick Wells, guitarist Dan Fulmer and Stange have not lost their wit. The song "Tonz of Fun" paints a portrait of a hefty girl, who after a night of too many cocktails and love making, is given the boot by her one night stand.

This less-than-ideal sexual tale will be performed in Kansas City this Saturday by Presence, who have just come off a harrowing few weeks without a tour manager.

But Stange isn't asking for sympathy.