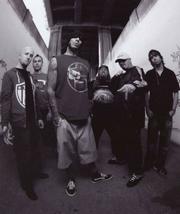 For (hed) Planet Earth, the past decade has been far from pleasant. Sure, the Huntington Beach, Calif., band has received both critics' praise and fans' dedication, but success in terms of record sales has been allusive.

While the band has witnessed the rise of friends in Korn and Incubus, its own hip-hop flavored metal records have still not yet hit platinum or gold status.

At least one of the six members in (hed) Planet Earth has seemingly come to terms with the possibility that his songs won't be number one on TRL or Billboard.

"We're not a band that sells millions of records," DJ Product said. "Personally, I don't worry about it anymore."

The 10-year-old (hed) Planet Earth plays Rockfest this Saturday at Verizon Wireless Amphitheater amid a swarm of bands that have followed the rap-metal trend.

When (hed) Planet Earth first formed, DJ Product said that trend was not even in existence.

"Before I got into this band, no one was doing what I was doing," DJ Product said. "I had no one to look up to."

The DJ did have a group of musically likeminded individuals to help guide him, however. Joining up with then-guitarist Chad Benekos, vocalist Jahred Shaine, guitarist Wes 'Westyle' Geer, bassist Mark "Mawk" Young, and drummer B.C. Vaught, attracted the interest of Jive Records in 1997.

Much of the band's first two releases, a self-titled debut and "Broke," reflect members' wild lifestyles, which some of the band are now trying to leave behind them.

While a few members still thrive on excess, the remaining ones have found other outlets.

"Wherever I go, I always mark my territory," DJ Product said.

His band will be making its own impression upon the Rockfest audience this Saturday with new guitarist Sonny Mayo, who replaced Benekos.

A new source for publicity has opened up for the band as well -- video games.

While "Vice City" reserves 80s music for its background, some sports-themed games have the current release from (hed) Planet Earth as soundtrack.

DJ Product liked the idea of exposing more people to his music, but the video games are a different matter.

"I don't even encourage it," DJ Product said. "I encourage kids to stay physical and do something more like skateboarding. I'm afraid to see kids glued to those games every day."

When it comes to getting word out about the band's music, playing live has garnered a dedicated fan base.

With 10 years behind his belt with (hed) Planet Earth, DJ Product said he had no plans to call it quits.

"I look at Willie Nelson and he just turned 70," DJ Product said. "He's still up there doing it. Yeah, I'm riding this wave till it ends."