Good and evil at the Chicago World's Fair

The Chicago World's Fair of 1893 was a place of wonder and discovery.

Shredded wheat and Cracker Jack made their debuts there. Villages from distant cultures in Africa and Europe were reconstructed. The fair, nicknamed "The White City," occupied 1 square mile and drew more than 27.5 million visitors during its six-month run. 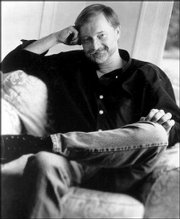 Erik Larson, author of "Devil in the White City," published by Crown.

But there was an underbelly. The mayor of Chicago was assassinated. Workers died during construction of several of the fair's buildings. And a serial killer roamed the city's streets, drawing victims into a strange building that contained a gas chamber, soundproof walls and a crematorium.

It is this stunning juxtaposition of discovery and destruction, of life and death, that makes up Erik Larson's novelistic nonfiction book "The Devil in the White City."

Throughout the book, Larson pulls off the difficult feat of moving the narrative along at a lightning-quick pace while imparting all the facts of the moment, the small details that bring the time period and the fair into focus.

He also manages to make the fair -- and not the murders -- the center of his tale.

Like a great promoter, Larson draws the reader in by promising macabre tales of murder at the hands of H.H. Holmes, the notorious serial killer who stalked the fair and became the embodiment of evil to the nation. However, Larson refuses to dwell on Holmes, instead making the tale of Daniel Hudson Burnham -- the fair's director of works -- equally important.

In chapters that alternate between Holmes' murderous ways and the construction and reality of the fair, Larson contrasts the motivations that drove the two men. For Burnham, it was a wish to create a world that would forever be remembered for its beauty and its vision. For Holmes, it was simply a need to kill, to rule over women whom he methodically seduced and dispatched.

He constructed a monstrosity called the World's Fair Hotel, a building "just comfortable enough and cheap enough to lure a certain kind of clientele and convincing enough to justify a large fire insurance policy."

Larson illuminates Holmes' thoughts with the murderer's own voice:

"'I was born with the devil in me,' he wrote. 'I could not help the fact that I was a murderer, no more than the poet can help the inspiration to sing."'

Still, Burnham's story is just as compelling, as he fights time and financial constraints to make the fair a reality and an answer to the Paris World's Fair of 1889, which featured the unveiling of the Eiffel Tower.

Throughout the book, Larson makes Burnham's drive to create a successful fair as interesting as the details about Holmes' mysterious and diabolical deeds. It is not an easy feat for a writer to pull off, but Larson succeeds. As a result, he has delivered a book that is a snapshot of an era, showing both good and bad in startling detail.