Dallas — It took best-selling author Sue Miller a decade to write her latest book, the true story of her father's wrenching struggle and death from Alzheimer's disease.

After many restarts and revisions, she produced a slim memoir that is part family history, part medical research and mostly a first-person account of the uncertainty and sacrifice of an uneasy caregiver. 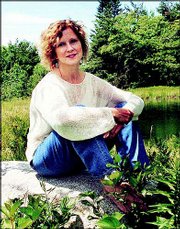 Fiction author Sue Miller, shown in an undated publicity photo, has written the true story of her father's struggle and death from Alzheimer's disease in her latest book, "The Story of My Father."

"The Story of My Father," published in March by Knopf, was therapy as Miller grieved the loss of her father, a self-effacing theologian and ordained minister who became a "wizened tiny form in diapers in his bed, all beaky nose and clutching hands."

Miller's last novel, "The World Below" -- parallel stories about a grandmother and granddaughter -- was published in 2001. It sold 200,000 in hardcover and paperback. "While I Was Gone," about a married veterinarian who faces secrets from her past, was an Oprah Book Club selection and sold 1.6 million copies. And a coming-of-age short story, "Inventing the Abbotts," was made into a 1997 movie featuring Liv Tyler.

Born in Chicago, Miller was a quiet child who read a lot and wrote poetry, and who was greatly influenced by her parents' pacifism and support of civil rights and racial equality. After graduating from Harvard University, she held odd jobs until her son was born in 1968. She separated from her first husband and worked in day care, took in roomers and increased her writing. She won a fellowship to the Creative Writing Program at Boston University in 1979, and her first story was published in 1981.

Her first novel, "The Good Mother," about a divorced father who sues for full custody of his daughter after the child sees her mother's lover naked, was published in 1986. A movie came out in 1988, starring Diane Keaton and Liam Neeson. "Family Pictures," about a family divided over an autistic child, was nominated for the National Book Award in 1991.

"The Story of My Father," Miller said, is not a how-to guide for caregivers -- she made her share of mistakes -- but a book designed to give insight to others with a terminally ill parent.

Her journey began one morning in June 1986, when police called her Boston home to say they found a disoriented man claiming to be her father, wandering through the countryside of western Massachusetts.

James Nichols, a retired professor at Princeton Theological Seminary, could no longer live alone. He eventually moved into a nursing home near his daughter, who became his primary caregiver until his death in 1991. He was unconscious in his last days; she fed him drops of water from a straw.

Miller, 59, writes candidly of the horrors of the brain-destroying disease, along with her own feelings of inadequacy.

"We always find ourselves deficient in devotion. Did you visit once a week? You might have visited twice. Oh, you visited daily, but perhaps he would have done better if you'd kept him at home. In the end all those judgments, those self-judgments, are pointless. The disease is inexorable, cruel. It scoffs at everything."

Miller even acknowledges a "frightened elation" for her father when he died from probable stomach cancer. "I thought I'd have to watch him completely ruined by the disease, and he nearly was," she says. "There was virtually nothing in his life that brought him pleasure. I thought this is his way out. I was glad for him. I was excited."

But she grieved for years, repeatedly abandoning the memoir to write novels, as she reflected on his last futile years, when his mind quit working but his body was slower to fail.

Miller, who was promoting her book in Dallas, says writing it brought her consolation. Her father, she realizes, was comforted by his religious beliefs. Even toward the end, when he suffered violent hallucinations and lost all reason, he could be soothed by the recitation of biblical passages and hymns.

"He was so accepting of his illness," Miller says. "He was at peace with it from the start and not startled and not grief-stricken by it."

For a deeply religious man, she writes, "his life and death already made sense."

But Miller's first attempt at nonfiction writing will be her last. She struggled trying to make narrative sense of real life, which doesn't always resolve in its last chapters. And for many, the memoir is a sometimes painful read.

The New York Times called it "thankfully useless, except as a sad and unnerving memento." But Publishers Weekly noted that Knopf's initial printing of 75,000 hardcover copies could sell easily among Miller readers, mostly women, who also may be dealing with aging parents.

Miller is beginning work on a new novel but hesitates to say much about it.

"It feels wonderful working in the fiction field," she says. "I'm so pleased to be inventing things again instead of being held in the situation."