New York — The New York Philharmonic, which made its home at Lincoln Center for more than four decades, announced Monday it will return to Carnegie Hall.

The 106-member orchestra cited Carnegie's celebrated acoustics as a key reason for its decision. 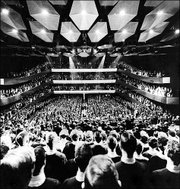 The New York Philharmonic performs in September 1962 before an opening-night audience at New York's Lincoln Center. The orchestra announced Monday it would return to Carnegie Hall where it had previously resided for 71 years, citing Carnegie's celebrated acoustics as a key reason for its decision.

"It's the greatest hall in the world," Philharmonic executive director Zarin Mehta said. "There's nothing like it. And if it's in our back yard, and we have an orchestra like we have which is also the greatest, to put the two together, it makes pure musical common sense."

A move is at least two years away.

The Philharmonic, the oldest orchestra in the country at 161 years, had played at Carnegie Hall from the hall's inception in 1891 until 1962, when it moved to the newly opened Lincoln Center. Both halls have nearly the same capacity: 2,800 people.

Officials at Lincoln Center expressed surprise at the timing of the announcement, which leaves it without a long-term occupant for Avery Fisher Hall.

"We tried for over a year to explore every conceivable alternative, from demolishing Avery Fisher Hall and building a new building to the last alternative we were focused on, of putting a brand-new auditorium within the existing structure," Lincoln Center president Reynold Levy said.

He added that the center first learned on May 29 that the Philharmonic and Carnegie Hall were engaged in serious discussions.

In their announcement, the boards of directors for the Philharmonic and Carnegie Hall said their merger would "create an institution of unmatched potential ... which will benefit music lovers, musicians and audiences the world over."

The boards said they will discuss "forming a single musical performing arts institution that will be vital to New York's cultural landscape."

They also will talk about the Philharmonic's lease with Lincoln Center, which runs until 2011, and a future performance schedule at both halls.

The Philharmonic has a "residual obligation to pay for the use of the hall for any dates that Lincoln Center is unable to fill with other performances," said Levy.