New York — Yes, you do see satin, lace and spaghetti straps on that woman in front of you on line at the grocery store.

No, that woman did not forget to get dressed this morning. 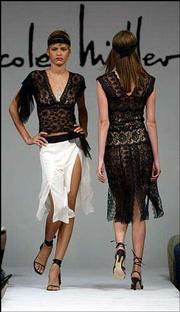 A black V-neck lace top with asymmetric mesh handkerchief pieces is modeled over a white georgette panel skirt with black yoke during the showing of the Nicole Miller Spring 2003 collection in New York. At right is a black lace strip dress with nude slip. The slinkier look of the bedroom is increasingly becoming part of everyday street fashion.

Silky satin, sexy lace and slinky straps -- all trademark lingerie looks -- are featured in some of this summer's hottest day and evening styles, and they'll continue to be important trends well into the fall.

"We brought in lingerie details because we wanted to infuse some femininity and sensuality into our very classic things," explains Deborah Lloyd, executive vice president of design and product development at Banana Republic. "I'm inspired by vintage clothing, and I find old nightwear and sleepwear and petticoats fascinating."

Banana Republic's current collection includes a pink cotton overlay dress with a breezy nightgown shape and a nightgown in pink linen with beige lace accents that has been spotted on the street as a dress.

Lingerie details also infuse a touch of Art Deco. Later this year, Banana Republic will offer satin camisoles with lace trim in wine and rose to wear under boucle suits and hip-skimming gowns in metallic satins.

"These clothes are so exciting because you can wear them for so many occasions. You can wear a camisole under a business suit, or with a pair of jeans is very sexy," Lloyd says. "Lingerie-ish dresses are more difficult at work; they're either for a dressy evening or a beach evening if the dress is casual and loose."

Dress codes at offices, restaurants and even schools have gotten more relaxed, which has allowed camisoles -- a close but more fitted cousin of the tank top -- to become a daily essential, observes Michael Weiss, president and CEO of Express.

"I think it's a trend that's been there for the past few years, but it's never been bigger than it is right now," Weiss says. People aren't wearing it head-to-toe, though, he notes, instead pairing a lingerie top with edgier pants and high heels, or a slip skirt or dress with a more tailored top.

As the camisole becomes more common out of the bedroom, some adaptations have been made since its origin as an undergarment. The design, fabric, construction and finish of Express' version, for instance, is not as delicate -- or sheer -- as the camisole one would find in a store's intimate apparel department, and most daywear camisoles are "bra-friendly" with thicker straps and a modest neckline, or have built-in shelf bras.

"Trend" is a word that is becoming almost obsolete because just about everything in fashion is "in," says designer Nicole Miller; styles simply take turns at the top of the hot list.

The current leaning toward lingerie probably is rooted in the popularity of vintage slips that have been dyed and turned into tunics, Miller explains.

Miller features lingerie-inspired styles in both her current collection and the fall line. "One of the things I try to do is to do 'lingerie' as a dress in an unusual fabric or print so you know it's a dress. ... You shouldn't look like you're wearing a slip if you're not -- but it's OK to wear a slip out as long as that's what you intended," she says.

One of the best-selling Nicole Miller dresses the past three seasons is a matte jersey sheath with colorful lace trim at the bust and at the bottom.

Lace infused with stretch can be very flattering and sexy because it hugs the body to create a seamless silhouette, but the texture helps mask figure flaws, Banana Republic's Lloyd says. Lace can even be worn to work if it's either lined or used for strategically placed insets.

Return of the corset?

Meanwhile, silk satin, which shined at the fall runway previews of Carolina Herrera and Ralph Lauren, makes an easy transition from lingerie to lingerie-inspired clothes because it's beautiful and feminine, and it's not transparent no matter what the color, Lloyd adds.

To avoid any confusion about whether you're wearing lingerie-inspired clothes or actual lingerie, Cindy Weber Cleary, InStyle's fashion director, says the rest of your outfit should be polished, including a neat hairstyle such as updo or chignon instead of "bedhead" and high heels (but stay away from feather-covered mules that might be mistaken for slippers).

If you're not ready for a full-on boudoir look, Weber Cleary says a petticoat skirt is the least intimidating -- and one of the most flattering -- styles. "It's an antique look that's still on trend, but it's more demure," she says.

And looking into the near future, Weber Cleary sees a lot of corsets. "For fall there are lots of designers doing structured corsets with boning and hooks and eyes," she says, noting the collections of Dolce & Gabbana, Gucci, Versace and Roberto Cavalli.

"In some ways a corset is easier because it gives a more secure feeling, but it's also much more restrictive and uncomfortable if you're moving around a lot," Weber Cleary adds.