"Take Me Out," Richard Greenberg's drama about a gay baseball player who comes out of the closet, was chosen best play. 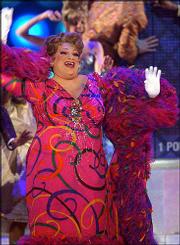 The "Hairspray" triumph was a family affair for three of its performers, who play mother, daughter and father in the musical, which is based on John Waters' campy film set in early 1960s Baltimore.

Harvey Fierstein won for his portrayal of hefty matriarch Edna Turnblad; Dick Latessa for playing Edna's diminutive husband, Wilbur, and Marissa Jaret Winokur for her performance as their daughter, Tracy, a perky, pudgy teenager determined to get on a television dance show.

Winokur gushed as she picked up the actress-musical prize.

"If a 4-foot-11, chubby, New York girl can be a leading lady in a Broadway show and win a Tony," she said to raucous cheers, "then anything can happen!"

It was Fierstein's fourth Tony Award, having won previously as the star and author of "Torch Song Trilogy" in 1983 and as author of the book for "La Cage aux Folles" in 1984.

When he took the stage, Fierstein said, "Boy, am I glad this was not a beauty contest," looking at Banderas, his main competition.

Brian Dennehy and Vanessa Redgrave, portraying parents of a very different sort, won the best actor and actress prizes for their work as the fiercely combative James Tyrone and his morphine-addled wife, Mary, in "Long Day's Journey."

An emotional Redgrave, winning her first Tony, recalled all the American actors, singers and dancers who inspired her over the years as she accepted her award.

Jane Krakowski, who makes a spectacular airborne entrance and exit in "Nine," was chosen best featured-actress in a musical.

Marc Shaiman, composer of "Hairspray," jokingly referred to the short musicians strike that shut down Broadway musicals in March during his acceptance speech.

"If anyone cuts me off, there's a virtual orchestra at 'Hairspray' on Tuesday," he said, alluding to how the threat of virtual (computer-driven) orchestras was an issue in the dispute.

Shaiman shared the award with co-lyricist Scott Wittman, with whom he's been partners -- professionally and personally -- for 25 years and to whom he declared his continued love.

The Tonys, chosen in 22 categories, are voted on by more than 700 members of the theatrical community and journalists.