By Story and photos by Amy Kelly / lawrence.com guest writer

For the 11th year, radio station 98.9 The Rock proved its Rockfest is a veritable feast for the eyes and ears.
Although the June 7 event focused heavily on the flesh with flocks of scantily clad women, it managed not to skimp on the more obvious ingredient: the music.

Fifteen bands kept the energy constant, bouncing crowds back and forth between two stages at Verizon Wireless Amphitheatre.

The second stage bands may have been virtual unknowns to the Kansas City crowd, but that didn't alter the mayhem.

This phenomenon was never more apparent when 40 Foot Echo hit the stage.

The Hollywood Records' quintet immediately spurred a raging mosh pit -- not bad for a group whose singer looked like he came straight from a gig as an Elvis impersonator.

Whereas the second stage recalled a scaled-down Woodstock II with all of the mud flying, the main venue allowed concertgoers to connect to their creative sides.

Seether, a group that formed in 1999 and has risen rapidly on the Billboard charts, had obviously left its mark before even coming onstage. Around every turn, an audience member sang passionately along with tunes from the band's U.S. debut, "Disclaimer."

A few girls even felt the desire to take on lesbian roles for the night. It could be the ultimate compliment.

For the band (hed) Planet Earth, radio airplay had not been as prevalent for it as with Godsmack or Saliva. The Huntington Beach group may not have made multi-platinum status when it took the main stage, but it may want to recheck its record sales post-Rockfest.

To call (hed) Planet Earth rap-rock wouldn't do it justice, particularly when vocalist Jahred Shaine and the boys played a killer rendition of Bob Marley's "No Woman, No Cry." Hearing reggae at Rockfest was a memorable moment indeed.

Of course, the audience was more keen on their "Fuck the Police" ditty, on which Shaine alternated between growling monster and gangsta rapper. The anti-authority anthem could easily have been the most well-received song of the day.

Headliners Godsmack and Saliva satisfied the crowd easily with their string of radio hits. Seeing the massive number concertgoers donning Godsmack t-shirts was a good indication that many attendee's primary reason for visiting Rockfest was the Boston band.

But sitting, listening to 15 bands doesn't skim the surface of the Rockfest experience.

Red-blooded, American men might have mistaken the Verizon grounds to be Eden -- with a little more sinning.
The Heavy Petting Zoo, a tent occupied by lap-dancing ladies from Lawrence's Outhouse, never ceased to have a long line of leering gentlemen. 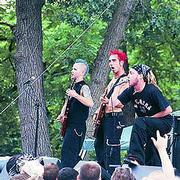 Harley Davidson motorcycles were on hand for viewing, while other booths offered those with only cash on hand items like necklaces, scarves and sunglasses - in other words, the things to wear for looking your best on a Harley.

To The Rock's credit, events sponsored by the station often have a charitable aspect.

At this year's Rockfest, the Turpentine Creek Wildlife Refuge brought two of its "Big Cats" to support its work of rescuing neglected or unwanted animals.

With all of the extras at Rockfest, concertgoers like 22-year-old Brian Littleton of Kansas City, Mo., were there for one reason.

"This is my 5th year at Rockfest and I love it," Littleton said. "I wouldn't miss it."