New York — More than 1,000 people clamored for Hillary Rodham Clinton's new book, an autograph and a chance to meet the senator on Monday as she launched a rock star-like tour to promote her long-awaited memoirs.

The scheduled one-hour event at a midtown Manhattan bookstore stretched more than 2 1/2 hours, as Clinton kept signing copies of "Living History" and passers-by hopped onto the end of the line. 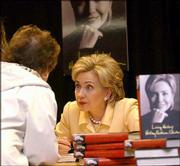 When she eventually walked out into a waiting van, a crowd cheered from behind barricades across the street.

"It was definitely worth it," said Krystal Powell, an office assistant and Clinton admirer who waited more than two hours for an autograph.

More than 400 people had lined up before the 11 a.m. event at Barnes & Noble, some after waiting through the night for a chance to get a quick chat with the former first lady on the book's first day in stores.

The Democratic senator said the event left her hand "a little worse for the wear," but added, "I really enjoyed it and I tried to talk to people so I could actually have a good time."

To handle the crowd, bookstore employees issued wristbands, like those given to rock concert fans. The bookstore had originally planned to give out 250, but distributed more than 1,000 as the event stretched on, said Donna Passannante, a Barnes & Noble executive.

"It ranks up there with one of the top book signings we've done here," she said.

Barnes & Nobles' vice president of marketing predicted the memoir would be the chain's No. 1 nonfiction book of the year. Simon & Schuster, which agreed to pay Clinton $8 million, printed an astounding 1 million copies. After seeing the turnout on Monday, the publisher decided to print another 50,000, spokeswoman Victoria Meyer said.

In the book, Clinton revisits the public and private wreckage from her husband's affair with intern Monica Lewinsky. She concludes that what her husband did was morally wrong but not a betrayal of the public.

In an interview with Time magazine, which is running excerpts from the book, Clinton is asked if she plans to run for president in 2008, and answers: "I have no intention of running for president."

Some of her fans predict otherwise.

Anne Braudis, 56, emerged from the book signing Monday with a gift for her grandson, who's 4 years old.

"I want to give him a copy of the book signed by the president of the United States -- when he's 10," she said.