...if you constantly compare it to Halo the whole way through, you will not like it. If you relax and have fun with its good points, you will have an enjoyable experience.

Digital Anvil had the near-impossible task of diverting Xbox owner's attention away form Halo until Halo 2. They were supposed to do this with Brute Force. Branded as a heavy action/squad based game, Brute Force delivers a great dose of action and a poor sense of squad based combat in an effort that won't come anywhere near Halo as Microsoft said it was going to. 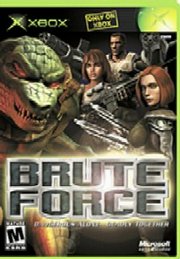 It's just as incredible as Halo!!! (Please note the sarcasm)

I wouldn't spend so much time in a normal review comparing a game to a specific other, but with all of the "it's like a third-person Halo" marketing tactics from Microsoft, I have no choice but to address the many comparisons. That being said, if you constantly compare it to Halo the whole way through, you will not like it. If you relax and have fun with its good points, you will have an enjoyable experience.

Bungie (Halo's developer) oversaw the last half of development of Brute Force. The feel of the human weapons such as pistols, snipers and assault weapons feels like it would if Halo were a third person perspective. You can only carry two weapons at a time. The control setup is exactly the same. The only differences being that B toggles your various types of grenades and the black button uses a med kit if you have it.

You also have three other characters at your command. Hawk can carry one light rifle and one side arm and can turn invisible; only character that can use power blade melee attack. Flint is the sniper that carries one rifle and one side arm who can target with utmost efficiency. Tex is the Master Chief/heavy firearm guy that carries heavy weapons only. His berserker ability allows him to use two weapons at the same time. Brutus is the feral warrior that carries a heavy weapon and a light rifle whose "Vengar" ability gives him thermal visions, regenerates health and a fatal charge attack.

You can switch between the characters depending on your situation, but rarely is it necessary. The squad commands are there to keep your squad from unnecessarily dying more then they are used to actually complete objectives. In fact, the highly touted squad system is a letdown. You have four things to tell your team. You can tell everyone of specific people to "stand ground," "cover me," "fire at will" or "move here." But that's where all strategy ends. That's how "tactical" it gets. In fact, the game makes sure you use this option quite often. Because if it's been awhile since you've commanded something, a level trigger point will force your squad to start doing whatever they feel like, abandoning the original command. This becomes more apparent in later levels when your squad goes kamikaze on the opposing force, dying quickly.

The general action is usually fun if you like casual gaming. There is nothing to discover, really. You could totally ignore the voice over and mission objectives since your base updates your navigation beacon (radar) constantly with the yellow "go here" dot. You go there, defeat enemies, wait for new yellow dot, rinse, repeat. The only time you would have to search for anything is when you have a mission objective likened to "kill all henchmen" and you've missed a henchman or two along the way. This can get extremely annoying when you are at the other end of a massive level and it won't let you advance until you spend 20 minutes searching out the one enemy you missed along the way.

To make your crew idiotic or not to make them idiotic. That is the question.

Killing enemies is particularly unrewarding. With Halo, you had reaction and rag doll physics. Brute Force sports both physics decently until an enemy is killed. At the time of the kill it's as if the enemy freezes and an invisible mouse clicks and drags the enemy away on an inverted half-pipe. It destroys any sense of realism.

There are a plethora of weapons to choose from including several types of grenades that are very well balanced. However many weapons are throwaways. There is no sense of any weapons being particularly well-crafted.

The presentation screams Bungie influence. Having title screens for various parts in a level, the user interface and the quasi-orchestral soundtrack seem very Halo-ish. The problem with Brute Force is that the writers, designers and music writers are nowhere near as talented as Bungie's highly coveted team. In Halo we had hip, mysterious level titles like "Truth and Reconciliation" and "Two Betrayals" that would only make sense later. In Brute Force you have no ounce of mystery or creativity with the likes of "Search for Brutus 1" and "Search for Brutus 2."

The soundtrack is nothing short of repeated generic orchestrations mixed with tribal techno. Absolutely nothing original or immersive like Halo did so well. The sound effects are very effective, however. Shots ping in true Dolby Digital and alien weapons whiz like something out of Deep Space Nine.

The speech is terrible from your squad. After the first level with a character, you will have heard everything they have to say throughout the entire game. In Halo, your marines and enemies always seem to say something new even a year after playing it. At least the voice acting in Brute Force is good, despite Brutus sounding like the bad guy from Inspector Gadget.

What Brute Force lacks in realism it makes up for in use of colors. In Halo everything seemed weathered and aged. In Brute Force, everything seems processed through a rainbow to showcase primary colors. That being said, it is a great game to look at, especially in progressive scan. The textures are detailed and the outdoor environments are big and lonely, although some of the obstacles in many levels seem placed by a shotgun charge rather than a thinking human.

The co-operative mode is much more fun when four players go through the game and you don't have to worry about the sloppy ally AI. It also takes the focus away from the A,B,C, repeat repetition of the objectives. Deathmatch is actually a lot of fun due specifically to many great level designs and a Halo sense of movement.

There are a lot of criticisms to be made, obviously, but Microsoft brought it on itself. But honestly, if you take away the Halo comparisons, the game does hold its own as an action-shooter. It is much more fun in multiplayer, but don't count on this replacing your Halo time anytime soon.