Will of a warrior 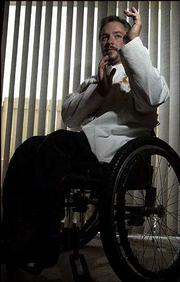 Steve Carrier has studied White Dragon Kung Fu for the past 10 years and has been offering instruction in the discipline for the past six years, all while using a wheelchair and crutches. Carrier has a congenital condition called arthrogryposis that stunted the development of bones and joint structures in his legs. "To me, my disability does not tell me who I am," he says.

Most people around town know Steve Carrier as the nice, mild-mannered guy in the wheelchair who works at Borders Books.

And, at first glance, that's who he appears to be: a guy in a wheelchair.

Carrier, 34, has forearms like fire hydrants and a chest that's a bit like a beer keg. He's got big shoulders and meaty hands with a vice-like grip.

Once you've shaken hands with him, you'll remember it. Carrier sometimes has to apologize for squeezing too hard.

Those who think Carrier must be a pushover because he's disabled are sorely mistaken. He's anything but.

In fact, he's downright lethal -- when he wants to be.

Carrier has practiced a martial art called White Dragon Kung Fu -- an open-handed form of Chinese self-defense -- for the past 10 years, and he's been teaching it to others for six years.

That's despite being born with a disability and needing to use a wheelchair and lower-leg braces to get around.

And, disabled or not, he can take care of himself. 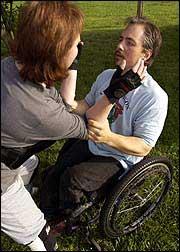 Steve Carrier stops a choke hold by student Laura Cuthbertson by using her pressure points. Carrier has a congenital condition called arthrogryposis that stunted the development of bones and joint structures in his legs. Nevertheless, he still practices and teaches kung fu.

That's something Dave Carrier, 51, Steve's uncle in Colorado Springs, Colo., can tell you from experience.

Also a martial arts enthusiast, Dave practices Okinawan karate, called shorin-ryu. When the two men get together, they like to test their skills against each other.

"I know that we sparred one Thanksgiving about three years ago, and I don't give him any mercy," the older man recalls.

"I placed a crescent kick on the side of Steve's head, and it knocked him out of his chair. Twice. The third time, he broke my foot. So he learns quick."

Steve Carrier must be a pretty dangerous guy to cross, right?

Not really, his uncle says.

"He'll be your best friend -- till you shove him."

Turned his life around

People are often surprised to learn that Carrier -- who's primary job is working as a social services liaison at Trinity Respite Care -- is able to practice martial arts.

"I get a lot of that: 'Really?' I like people who are open and honest. They say, 'How do you do it?' A lot of people have misconceptions of martial arts and of disability. When you put both of those misconceptions together, they can't comprehend it," he says. 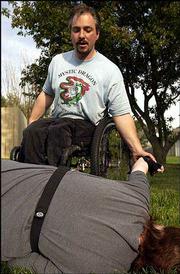 "I was born this way. During fetal development, the bone and joint structure of my legs did not develop in my lower extremities. I have muscle, and I have movement. I have strength, but when it comes to supporting my body weight and balancing ... that's why I wear the braces; they hold my joints in place," Carrier says.

When he decided to take up Kung Fu, the 1993 Kansas University graduate was at a low point in his life. Carrier was on disability, staying in Ottawa at the time, where his parents live.

"Back when I first met Master (Larry) Collins, my instructor and mentor, physically and health-wise, I was a complete mess. I had endless health problems. I felt horrible both outside and inside; that's the best way to put it," he remembers.

"I was having a hard time succeeding, and I had a defeatist attitude. At that point I said, 'I've gotta do something; I'm ruining my life.'"

Wanting to learn self-defense and get in shape, he began taking instruction there. Soon, with encouragement from Collins, he was going to classes every night.

Steve Carrier of Lawrence, a second-degree black belt in White Dragon Kung Fu, is available to teach this open-handed form of self-defense.Instructional sessions at his home typically last one hour to 90 minutes. He will meet with students once per week or more.Carrier charges $60 per month for martial arts instruction. He is also certified to teach the Chinese tradition of dynamic movements called tai chi.

"This was something different, and I liked it," Carrier says.

Practicing kung fu, adapted by Collins to his student's physical capabilities, turned things around for Carrier.

"Probably after the second year, it started settling in. I don't live for belts or degrees in the art, although I've got them. What drives me to do this is the way of thinking I adopted that came out of the discipline. That's why I call it a lifestyle: It's your entire approach to everything in life," he says.

Handicap doesn't get in way

The main obstacle Carrier had to overcome to learn kung fu wasn't physical -- it was mental.

"I've taught several people that were either in a wheelchair or on crutches. You first have to learn what their true handicap is," says Collins, who has a fifth-degree black belt in the white dragon kung fu system.

Carrier has been able to do that.

"Steve's in a wheelchair; I cannot deny that. But he is not handicapped mentally because of it. The wheelchair is actually a weapon for him now. He has been taught to use it to his advantage," said Collins, 56.

The two men continue to work together. Once every week or two, Carrier drives to Waverly, where Collins now lives, for continuing instruction.

Collins has taught white dragon kung fu for 34 years, and he gives clinics and seminars at kung fu schools in Manhattan, Pittsburg, Stilwell, Ottawa and Waverly.

He figures he has taught between 12,000 and 15,000 students and closely documents their progress. In that time, he has awarded 22 black belts -- and only three second-degree blacks -- to his students.

One of those three distinguished students is Carrier.

"Steve could probably handle his own with just about anything that would happen on the street," Collins says. "We spend an awful lot of training time so that when somebody attacks him, they end up on the floor with him and the wheelchair on top of them."

"When he was young, he would worry about being beat up or pushed around. (Kung fu) has just pretty much change him mentally and emotionally in his confidence level," he says. "You may see him as a person in a wheelchair, but he sees you as a peer, an equal, with no advantages. With Steven, he probably thinks he has the advantage -- and he may."

Now the student has become the teacher.

Steve Carrier is training six people in white dragon kung fu, two of whom live in Lawrence. Someday he might even have his own martial arts school.

"To me, my disability does not tell me who I am. My disability is not Steve Carrier -- it's just something else that I have to work with," he says.

"It doesn't keep me from doing anything. It just takes me longer sometimes."