'Homicide' is too Hollywood 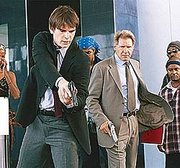 Midway through "Hollywood Homicide," young detective K.C. Calden (Josh Hartnett) is describing to veteran partner Joe Gavilan (Harrison Ford) his spiritual awakening through yoga. Calden explains that he originally got into the practice to meet girls, but now it provides him with a deep appreciation of the universe.

Gavilan pretends to understand, remarking that yoga is "deep AND shallow."

This comedy from writer-director Ron Shelton ("Bull Durham") has a brilliant central notion: to approach the L.A. buddy-cop flick as if the characters are just another arm of the Hollywood industry that serves as their precinct. K.C. is a second-generation detective, but he really wants to be an actor. Joe has a side job selling real estate, and is constantly using his cell phone to broker deals between movie producers and rappers even while in the midst of a high-speed pursuit.

This is a pair that is more concerned with head shots than shots to the head.

But as much as Shelton tries to spice up the genre by revamping the characters, the picture still disintegrates into a numbingly routine action romp. The plot of "Hollywood Homicide" relies on such chestnuts as an Internal Affairs team investigating the hero, a crooked cop on the inside, a fleeing killer who keeps climbing up things to escape, and a 25-minute car chase/fight scene finale that is the definition of preposterous.

Writer-director Ron Shelton tires to revamp the L.A. buddy-cop flick by making the characters just another arm of the Hollywood industry. Although the actor wannabe and real estate-obsessed detectives (Josh Hartnett and Harrison Ford) are quirky, the movie still gets mired in cliches, particularly with its mundane, chase-heavy finale.

It's one thing to embrace a cliche in order to twist around the story line in a new way (see "Adaptation"); it's another to get so mired in trying to parody something that it becomes as cliche as its source (see "Showtime").

At least the film starts well.

Following a nifty credits montage of different Hollywood signs throughout the city, the movie casually sets up the quirky nature of its leads. Given the relative ages of the stars, Shelton admirably avoids rendering K.C. as a hothead with no regard for authority, or Joe as a grizzled loner who attempts to teach the kid a lesson.

As the men first investigate a gangland-style killing of a hip-hop act, they're portrayed as friendly and respectful of each other's abilities/shortcomings even if they are a tad preoccupied with their own extracurricular affairs. K.C. is practicing for his role of Stanley Kowalski in a one-time presentation of "A Streetcar Named Desire" that he has organized to showcase his talents for agents. Meanwhile, Joe is desperately trying to unload his swanky Mt. Olympus property, even appealing to some of the wealthier witnesses that he is interrogating.

Both men's personalities are reflected in their ubiquitous cell phones. Joe's rings to the tune of "My Girl." K.C.'s is set to "Funky Town."

Before long, however, the movie gradually becomes like every other cops vs. cover-up tale. The narrative grows increasingly reliant on laborious chase scenes and noisy shoot-outs. The "surprises" turn contrived and inevitable. Of course "the bad cop" (Dwight Yoakam) was responsible for the death of K.C.'s father. Of course Joe is having an affair with the wife (uber-sexy Lena Olin) of the Internal Affairs officer who is harassing him.

Add in the distracting cameos of rappers and '60s-era soul musicians (e.g. Smokey Robinson as an irate cab driver), and the movie begins to prove no different than those it initially tried to lampoon.

By the end, "Hollywood Homicide" appears just as generic as its title. Consider it more shallow than deep.