It was one of those moments you don't ever forget.

The Lawrence Children's Choir had just finished listening to the St. Paul's Cathedral Choir at Evensong in London when they were ushered to the lobby of the centuries-old building to sing a song of their own. 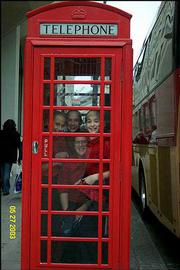 Lawrence Children's Choir members, from left, Jennifer Taylor, Kristina Taylor, Natalie Rabiola and Lindsay Gauthier clown around in a London phone booth during the choir's tour in late May/early June. The choir sang at St. Martin in the Fields, St. Albans Cathedral and Windsor Parish Chapel during the trip, which originally was scheduled for the spring of 2002 but was rescheduled after the Sept. 11, 2001, terrorist attacks made parents apprehensive about world travel.

"There were the most fabulous acoustics, and the kids were just right on," choir director Janeal Krehbiel said. "I slowed the thing down because the echo was so profound. Afterwards, I turned around, and there was hardly a dry eye."

The choir received similarly enthusiastic reactions to its performances wherever it went during its weeklong London tour that stretched from late May to early June.

Complete strangers who noticed the group's red Lawrence Children's Choir T-shirts asked them to sing. They frequently obliged. Once while browsing a market in Windsor, Krehbiel heard her choir's voices rising above the street noises.

"It was a very heartwarming experience," she said.

Sixty-five children, 20 adults and about 20 family members traveled on the London tour, a trip planned for the spring of 2002 but canceled after the events of Sept. 11, 2001.

The choir sang by invitation at St. Martin in the Fields in Trafalgar Square, Windsor Parish Chapel in Windsor and St. Albans Cathedral in St. Albans. Though they were invited to sing inside St. Paul's Cathedral in London, they declined the invitation because they would have had to prepare an entire program of sacred a cappella music.

Krehbiel enjoyed hearing the choir sing in incredible venues, but she enjoyed watching the children learn and grow even more.

The choir returned June 2, and immediately, despite their jet lag, performed at the annual Chorus America national convention in Kansas City, Mo. They were the only children's choir at the conference, at which mostly paid professional choirs sang.

In March, the choir will sing at the Southwestern American Choral Directors Convention in Little Rock, Ark.

The choir is looking into taking another international tour in 2005.